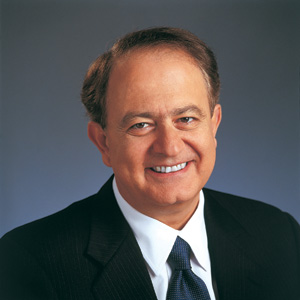 C.L. Max Nikias, professor of electrical engineering and dean of the USC Viterbi School of Engineering, has been named provost and senior vice president for academic affairs at the University of Southern California.. He will begin his new duties June 1, 2005.

The provost is USC's chief academic officer and the second-ranking officer under the president. All of the university's deans report to the provost, as do the divisions of Student Affairs, Information Services, and Enrollment Services. He serves with the senior vice president for administration as the chief operating officer of the university.

"No single appointment is more important to the success of this university than that of the provost," said USC President Steven B. Sample. "For that reason, we went to extraordinary lengths to make sure we had access to the very best candidates. All told, more than 160 people applied for or were nominated for this position. In the final analysis, Max Nikias had the combination of abilities and experience that I believe will best serve this complex research university at this critical juncture in its history."
"This is a man who is internationally recognized for his research on integrated media systems, digital communications and signal processing, and biomedicine, and who is also a passionate advocate of the arts and humanities. In the 14 years he has been at USC, he has worked assiduously with faculty from USC College and most of the professional schools in promoting interdisciplinary research and education. As dean, he has built the Viterbi School into a research powerhouse, and at the same time has focused on the education of undergraduate and graduate students and post-docs. He has been instrumental in bringing major research institutes to USC that continue to benefit the whole university.
"Max is a visionary with his feet firmly on the ground. He is an effective fundraiser who is able to inspire private donors, foundations and government agencies to invest in USC.  He has deep respect for USC faculty and will work closely with the deans to get them the support they need to operate at the highest levels."

Nikias replaces Lloyd Armstrong, Jr., who is returning to the faculty after serving as USC's provost for the past 12 years.

Nikias has been on the USC faculty since 1991 and has served as dean of USC's Viterbi School of Engineering since July 2001. He is the holder of the Z. A. Kaprielian Chair in Engineering. He leads a school that is consistently ranked among the top 10 engineering schools in the United States. He has spearheaded dramatic increases in the quality of students, in research growth, in fundraising for the School's endowment, and in the expansion of distance education programs. Nikias was the founding director of two national research centers at USC: the National Science Foundation (NSF) Engineering Research Center (ERC) on Integrated Media Systems and the Department of Defense Center on Communications Signal Processing.
Nikias has been instrumental in supporting the Information Sciences Institute in the Viterbi School, and in working with faculty across the university to establish the two NSF ERCs as well as the Department of Homeland Security's first Research Center of Excellence.
Nikias is the author of more than 100 peer-reviewed journal articles, 180 refereed conference papers, three textbooks and eight patents. Several of his publications and patents are in the field of translational medicine, including invasive and non-invasive methods for the detection and classification of myocardial ischemia, which he did in collaboration with the University of Maryland Hospital and Buffalo General Hospital. He has mentored more than 30 Ph.D and postdoctoral students. He has consulted extensively for the U.S. Government and high-tech industry during the past 20 years. He also has testified extensively before the California legislature on the impact of digital technologies and communications on the entertainment industry and on the California economy.
Nikias has received numerous research and teaching awards and honors, including three Best Paper awards. He was recognized as an outstanding teacher by the National Technology University, a consortium of top research universities engaged in distance education. Nikias is a Fellow of the Institute of Electrical and Electronics Engineers, Fellow of the California Council on Science and Technology, and received a formal commendation from the California Governor for cutting-edge research. He is a member of Phi Kappa Phi.
Nikias serves as a member of the Board of Directors for the Lord Foundation of California and  the Alfred Mann Institute for Biomedical Engineering at USC,  and as a member of the Board of Trustees of the Chadwick School, an independent school in Palos Verdes Peninsula, Calif.
A native of Cyprus, Nikias is an honors graduate of the Famagusta Gymnasium, a school that emphasized history and Greco-Roman classics. He is a recipient of a Diploma from the National Polytechnic of Athens. For his graduate studies, he attended the State University of New York at Buffalo, earning Master of Science and a Doctor of Philosophy degrees. He is a
recipient of an honorary doctorate from the University of Cyprus. Nikias lives in Rancho Palos Verdes with his wife, Niki, and their daughter Maria. Their daughter Georgiana is a student at the USC College.