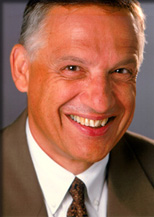 Yannis C. Yortsos, currently senior associate dean for academic affairs, has been appointed dean of the USC Viterbi School of Engineering for an interim period effective June 1.  Yortsos will replace C. L. Max Nikias who becomes USC provost on the same date.
The current USC provost, Lloyd Armstrong, Jr., announced the appointment on behalf of President Steven B. Sample.  In the announcement, Armstrong said that Yortsos would serve in an interim capacity until a new dean is found. A formal search for a new dean will be launched immediately after Labor Day with Nikias chairing the search committee.
“I am honored and humbled with this appointment. It is one of great responsibility and challenge, and I deeply appreciate Max’s confidence in me,” said Yortsos.  “We have an experienced, energetic and confident leadership team in place and Max has built up a huge amount of momentum. We will continue the Viterbi School’s spectacular ascent.”
Yortsos, a professor of chemical engineering, is the Chester F. Dolley Professor of Petroleum Engineering.  His is well known for his work on fluid flow, transport and reaction in porous media with applications to the recovery of subsurface fluids (oil recovery and soil remediation).  He has also been actively involved in peer review of the Yucca Mountain Project for the disposal of high-level radioactive waste
“I have complete confidence in Yannis,” said Nikias.  “Yannis has been at my side for the entire four years that I have been dean and he is intimately familiar with all of the Viterbi School’s initiatives and other affairs.”
Yortsos served as chair of the Department of Chemical Engineering from 1991 to 1997 and he has been part of the senior leadership team at the Viterbi School since July 1, 2001.
In 1981, he received the ARCO Oil and Gas Outstanding Junior Faculty Award and in 1985 he was honored with the Rossiter Raymond Award from the American Institute of Mining, Metallurgical and Petroleum Engineers.  He also received the Orange County Engineering Council’s 2000 Distinguished Educator Award.
Yortsos earned a diploma in chemical engineering from the National Technical University in Athens, Greece and his M.S. and Ph.D. in chemical engineering from Caltech. He, his wife Sheryl and their three children Christopher, Katherine and Stephen live in San Marino.
Click here to read the Provost Announcement (PDF)