September 07, 2005 —
On Sept. 16, the National Science Foundation (NSF) hosted more than a dozen robots and their creators to showcase advanced robotics technology from across the nation — a showcase with a pronounced USC Viterbi School slant.
Entitled "Robots: An Exhibition of U.S. Automatons from the Leading Edge of Research," the event will present the findings of the World Technology Evaluation Center International Study of Robotics, which looked at robotics research and development in the United States, Japan, Korea and Western Europe.
Viterbi School professor emeritus George Bekey chaired the panel of six robotics experts who visited more than 50 research sites across the globe over the course of two years to create the report, which was sponsored by NSF, NASA and the National Institutes of Health.

Bekey presented the findings, and with his five colleagues answered questions in a live webcast that is now archived at:  http://www.vodium.com/goto/nsf/robots.asp.
The findings for the United States are not all positive.  U.S. researchers have developed advanced robotics, but national strategies and coordinated funding efforts in other countries pose a serious challenge to U.S. competitiveness.  While our nation leads in such areas as robot-assisted surgery and mobile, space robots, foreign laboratories are developing the state-of-the-art service and industrial robots — in some cases overtaking the United States in fields we once dominated.

These included the humanoid head created by the Viterbi School computer scientists Stefan Kai Schaal and Laurent Itti, which tracks visitors as they move around a room. The head, says the NSF description, "shares some functions with human heads. The robot can learn from a human teacher to perform various motor behaviors and can use visual attention mechanisms to focus on interesting objects in the environment. The demonstrated behaviors reflect interdisciplinary research in neuroscience, robotics and computer vision, and serve as building blocks for creating autonomous, full-body humanoid robots."

More information about the event can be found at: http://www.nsf.gov/news/news_summ.jsp?cntn_id=104421 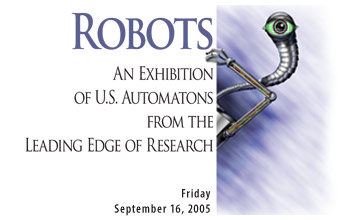