December 02, 2005 —
Mullet had a mission.
First, Mullet had to locate a green beanbag, one of eight spread all over a 400-square-foot  enclosure on the second floor of the California Science Center, using its eye. Then, it had to range and approach the beanbag, using an acoustical sensor. Then, pick up the beanbag, using its gripper. Then, take the beanbag to "safety" at the edge of the enclosure. And then go back for another. All without help from his student creators, watching anxiously outside the enclosure, barred by the roles from intervening: once Mullet had been switched on, Mullet was on its own.
Mullet was one of 16 robots prepared by students in the Viterbi School's upper level introductory robots course, CSCI 445, the "LEGO-kit based hands-on lab course" developed by Viterbi School professor Maja Mataric'  that has become legendary for its spectacular final project day.

For the Fall, 2005 installment of the classic, 48 students, divided into teams of two or three, had tuned and polished their basic materials: $550 LEGO kits and a standard brain chips.
As museum visitors and reporters looked on, the 'bots went through their paces under the watchful eyes of computer science specialist Stefan Hrabar and head teaching assistant Christian Siagan.

How does tthe class of '05 measure up to the tradition?  Here are some teams.and their creations. Check the archive to see. some of their predecessors. 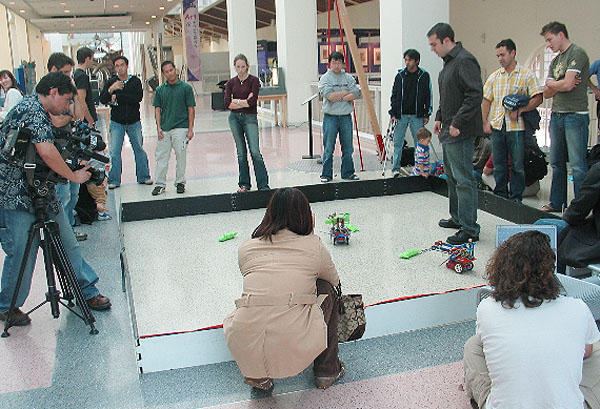