Class rushes to build a flying prototype in a single semester


November 21, 2006 — It's called LEAPFROG, and Viterbi students have been jumping to get it done. David Barnhart's undergrad/graduate research project to create a Lunar Lander Prototype Vehicle began September 1 and will proudly show off its hardware December 4th at the 2nd Space Exploration Conference in Houston.

LEAPFROG stands for "Lunar Entry and Approach Platform for Research on Ground.” Prof. Mike Gruntman, chair of the Astronautics and Space Technology Division (ASTD) and David Barnhart, the director of the Aerospace Technology and Systems Center at the Viterbi School's Information Sciences Institute, have supervised an enthusiastic group of 14 budding ASTD astronautical and other department engineers, graduate and undergraduate, in building a small, autonomously controlled hovercraft that can simulate landing on the moon

According to Barnhart, the design is inspired by a real,  full-size machine used to train Apollo astronauts, the Lunar Lander Research Vehicle, a flyer that simulated (by means of a special, additional jet engine) the reduced gravity that the Lunar Module would encounter. LEAPFROG is smaller (a little more than 3 feet in diameter) and much, much cheaper (about $12,000 compared to millions for the original LLRV).

But Barnhart said it will provide "an actual flight platform … to test early prototypes of key landing subsystems, through a similar profile, and in similar dust and lighting conditions that will be experienced on the moon."

The goal is "hardware, not paper," in the words of the project plan, with a "focus on rapid fabrication, integration and test - build a little, test a little, fly a little."

The success so far has already attracted the attention of the aerospace community and NASA, leading to an invitation to showcase the project in Houston.

“I am amazed at the progress and scope the student team has achieved in such a short time,” said Alan Weston, from Ames Research Center, who attended the Critical Design and Integration Review, which the team held only a few weeks after coming together.

So far, the principle obstacles have been juggling the student team's schedules with the demands of a fast paced flight project.

Barnhart said standout successes have included design and fabrication of the attitude control thrusters by Savith Chauhan within six weeks, a process normally taking three months; architecting, purchasing and running the Rabbit microcontroller software and PLC hardware to control the jet engine and the ACS thrusters by Omair Rahman and Cassandra Raskin; and successful test firing and characterization of the jet engine by Jason Cheng and Daniel Frolich on campus, within one week of training.

The teams' next major step will be to execute a static hot fire test of the jet engine and the attitude control system.

This semester, the goal is just to get off the ground, but Barnhart plans to have LEAPFROG continuing to jump in coming semesters. 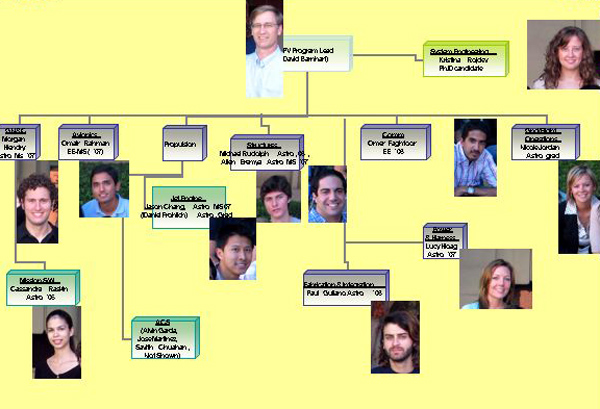