Eric Mankin
December 21, 2007 — The growing sophistication of the games development and education program at USC was evident in a morning in which students and faculty from three schools - the Viterbi School of Engineering, the Roski School of Fine Arts and the School of Cinematic Arts - presented a glittering lineup new ideas.

GamePipe Executive Director Mike Zyda described the event.
"Demo Day serves as a checkpoint for student progress in the games program. Students present their semester's work to representatives from the game industry, with the hope that their work will attract the eye of industry for an internship or position upon graduation.

"The Demo Day was joint between the Viterbi School of Engineering's  GamePipe Laboratory, the School of Cinematic Arts Program. Teams for games built in the co-taught, combined courses reached 14 to 19 students, including students from computer science, interactive media, fine arts, animation, and composers from the School of Music. This was the first offering of the combined Final Game/Advanced Games Projects course.

"That course is the largest cross-disciplinary teaching effort ever carried out in the history of the University of Southern California and represents the future of university education. Designers, artists, animators, and engineers learned to work together collaboratively over the course of the 16 week semester to build prototype entertainment games of original content.

"The three games built with cross-disciplinary teams included Ragnarokk, a music game utilizing a Guitar Hero guitar as input device to fight off demons, Errantry, a unique game that required the player to act out story emotion using an attached Wii-mote, and the Adventures of PB Winterbottom, a game whose mechanic was the ability to record the player's character in time and then play back that recording in interaction with the game player's current character. "

The Winterbottom team has been invited to demonstrate their game to Electronic Arts in Redwood Shores. Additionally, members of the massively multiplayer infrastructure project from the Networked Games course were actively recruited by Activision.

Students participating in the cross-disciplinary course this Fall will continue developing their games in the joint Final Game/Advanced Game Projects B course in spring, where the games will be readied for competition.

In  addition to Zyda and Victor LaCour of Gamepipe,  Chris Swain of the School of Cinematic Arts was on hand introducing student projects.  The trio previously collaborated on a  paper  detailing the advance of game study as USC, "Operating A Computer Science Game Degree Program," The paper has details on the organizational solutions  to  creating an  inter-school  program,  along  with impressive statistics on the impact of games study on the CS department.

Continued Interschool cooperation was demonstratedat the event.   Ann Page and Tomo Isoyam  of the Roski School  made a presentation about work by students in the new Fine Arts courses for Games minors, notably in  character design. Page has acquired a 3D printer for the program,  which will be able to create plastic models of possible Games characters, to enable students  to prefect their designs.

What's next?  Spring Game Day, in May, Zyda  says. 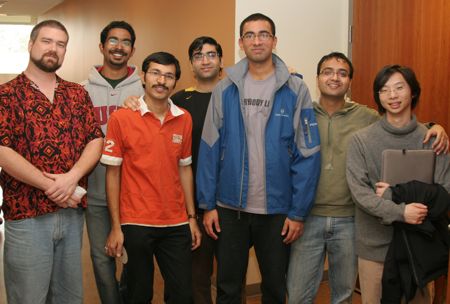 one  of the presenting teams....