"Andrew Viterbi is one of the few, one of the elite, whose intellect and imagination have helped advance human understanding."

Diane Ainsworth and Eric Mankin
October 02, 2008 — On September 29, 2008, Dr. Andrew J.  Viterbi, a trustee of the University of Southern California and the namesake of the USC Viterbi School of Engineering where he holds the USC Presidential Chair, received the National Medal of Science from President George W. Bush in the White House East Room.
At the ceremony, President Bush praised the laureates as "a new generation of people who have strived for excellence; people whose discoveries have changed America and the world....

"The men and women we honor here hold more than 100 patents. They are the leaders in business and industry. They publish influential books. They chair academic departments in some of our country's finest universities."

Dr. Viterbi's citation, read during the ceremony by an attache, praised his development "of the maximum-likelihood algorithm for convolutional coding, known as the 'Viterbi algorithm,' and for his contributions to Code Division Multiple Access (CDMA) wireless technology that transformed the theory and practice of digital communications."

The 10 a.m. White House ceremony was preceded the evening before by a black tie event held at the Ritz Carlton in Washington, D.C. that drew approximately 200 people affiliated with the laureates.

The Viterbi School sponsored a table at this event.  Present there with the laureate and his family were Dean Yannis C. Yortsos; William Rees, deputy under secretary of defense for laboratories and basic sciences;  Brendan Godfrey, director of the U.S. Air Force Office of Scientific Research; Ray Yin, an associate of Ming Hsieh, benefactor of the USC Viterbi School Ming Hsieh Department of Electrical Engineering; William Wiesmann, a member of the Viterbi School Board of Councilors, and his wife Sandy;  Steven Moldin, executive director of the USC Office of Research Advancement; Roderic Pettigrew, director of the National Institute of Biomedical Imaging and Bioengineering; Jennifer Grodsky, executive director of Federal Relations for USC in Washington, D.C.; and Adam Clayton Powell, III, USC vice provost for globalization.
Google and e-Bay also hosted tables, and were honored along with the Viterbi School for doing so during the evening's events.

Posters of the eight Science medalists and eight Innovation and Technology medalists — and his/her accomplishments — adorned the lobby during a reception prior to the dinner.  During dinner, guests were entertained with video vignettes of each laureate’s achievements, which were “fabulous,” according to Grodsky.

The laureates received cheers and applause as they were called to the stage one by one while people bobbed up and down to snap photographs. Viterbi was awarded his Medal of Science pin by National Science Foundation Director Arden Bement and Deputy Director Kathie Olsen.

The National Medal of Science is the nation’s highest honor for scientific achievement in a range of fields, including physical, biological, mathematical, social, behavioral, and engineering sciences. The award is given to individuals whose discoveries and contributions “enhance our understanding of the world and leads to innovations and technologies that give the United States its global economic edge.”

Viterbi, a pioneer in digital communications and namesake of the USC Viterbi School of Engineering, is a USC trustee and also holds the USC Presidential Chair. He has received honorary doctorates from universities in the United States, Canada, Italy, and Israel, and has been otherwise honored in Japan, Germany, Italy, and the United States. He is a fellow of the Institute of Electrical and Electronics Engineers, a Marconi Fellow, a Franklin Medalist, and a member of the National Academy of Engineering, the National Academy of Sciences, and the American Academy of Arts and Sciences.

"It's thrilling to know that one of the intellectual giants of our time is also one of USC's most faithful alumni and wisest trustees," said USC President Steven B. Sample, on the day Viterbi's award was announced. "Few people in any field can say that they have truly 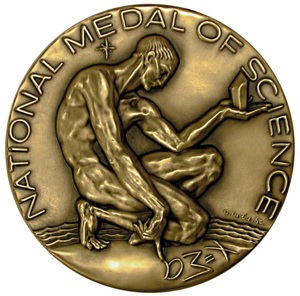 enhanced the world in which we live. Andrew Viterbi is one of the few, one of the elite, whose intellect and imagination have helped advance human understanding. This is a tremendous honor for Andy, and a well-deserved recognition of his historic accomplishments."

For a complete transcript of the proceedings in the East Room of the White House, including a video webcast of the ceremony and sound files, go to:
http://www.whitehouse.gov/news/releases/2008/09/20080929-4.html

For the National Science Foundation press release on the award ceremony and the 2007 laureates, go to:
http://www.nsf.gov/news/news_summ.jsp?cntn_id=112155&org=NSF&from=news

For the original Viterbi News article on the award, go to:
http://viterbi.usc.edu/news/news/2008/usc-s-viterbi.htm