Work by specialists from the USC Viterbi School of Engineering has led to significant improvements in turnover times for operating rooms at three California safety net hospitals, allowing "many more hours of daytime surgery per year." Because of the success of the program, the work will be expanded to include three more hospitals.


A team from the Viterbi School's Epstein Department of Industrial and Systems Engineering began work in January, 2008 at Childrens Hospital of LA, Riverside County Regional Medical Center and Ventura County Medical Center. "The USC team, along with the nurses and doctors at the hospitals, applied engineering principles such as is done to streamline productivity at Toyota and other efficient organizations," explained researcher David Belson.

According to a September 26, 2008 report on the project made to the study funder, the California HealthCare Foundation, reducing O.R. turnover time was adopted as a goal because "this single metric is easily calculated and can be compared to industry benchmarks."

"Recommendations are still being implemented and a greater impact is expected," the report states adding that "the 21% average reduction thus far adds many hours of daytime surgery per year for each of the three hospitals studied."

The operational changes made were implemented with cooperation and extensive input from hospital staff. They included, at all three hospitals, efforts to:


Three other hospitals, including San Francisco General in Northern California and Valley Presbyterian and St Francis Hospital in Southern California are now working with the Viterbi School team.

The kind of conditions observed and changes recommended are exemplified in one section of the report, discussing general factors involved in the problem:

"Patient flow in surgery consists of several sequential steps. Just as in a manufacturing flow or other sequential processes, there 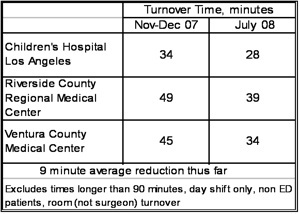 must be a balance of capacity and a smooth flow of patients. Late arrival at any one step creates delays in subsequent steps. Often a crucial step is the pre-op holding area just before the patient is moved into the operating room.  The patient must be in pre-op in sufficient time for interviews by the clinical staff, checking of paperwork and various clinical tasks.

"If the patient arrives without sufficient time before the start of surgery, then the surgery start will be delayed until all the interviews and paperwork is completed. We often found that patients arrived in pre-op less than 15 minutes before surgery was scheduled when one-half of an hour or more was needed."

Some useful adjustments were based on common sense factors rather than sophisticated process engineering.  For example: "Given the costs, it would be better to have patients arrive at pre-op early rather than late. Some pre-op and related areas felt that patients were less comfortable in per-op than in the admitting area and therefore slowed movement to pre-op. A better solution would be to improve conditions in pre-op.  In one case, we recommended – and the hospital acted – to move a TV set from admitting to pre-op."

"Management engineering improves access to health care as well as reduces costs for the patient," says Belson. "Southwest Airlines has shown how faster turnaround times for planes helps reduce costs and increase passenger satisfaction. We believe health services delivery can learn from examples like these."

About the California HealthCare Foundation
The California HealthCare Foundation is an independent philanthropy committed to improving the way health care is delivered and financed in California. By promoting innovations in care and broader access to information, our goal is to insure that all Californians get the care they need, when they need it, at a price they can afford. For more information on CHCF, visit us online at www.chcf.org.