Eric Mankin
January 09, 2008 — More than 120 experts and grad students from four continents assembled in December on the USC University Park campus for the first-ever conference on quantum error correction. The technique, first proposed in 1995, may make possible computers with extraordinary capabilities and is now under intense development.

The gathering, the Quantum Error Correction Conference, was organized by three USC faculty members: Daniel  Lidar, Todd Brun and Paolo Zanardi of the Center for Quantum Information Science and Technology, operated jointly by the USC Viterbi School of Engineering and the College of Letters, Arts and Sciences. The conference marked the official launch of CQIST, which provided part of the funding for the event. Lidar and Brun are both associate professors in the Ming Hsieh Department of Electrical Engineering.
According to Brun, attendees came from all over the United States and from Canada, Britain, Germany, Poland, Israel, China, Japan, and Australia.

Among the attendees was Peter Shor of MIT, whose factoring algorithm launched the current interest in quantum computers, and who was the first to design a quantum error-correcting code.

More than seventy conference talks and poster presentations covered all aspects of quantum error correction.  This included both the latest theoretical results on quantum codes and dynamical decoupling and presentations on the current experimental state of the art and the prospects for building small-scale decoherence-protected quantum computers in the near future.

A selected group of participants are writing a book on quantum error correction, which will be edited by Brun, Lidar and Zanardi, and published by Cambridge University Press.

"We thank Mayumi Thrasher for her outstanding administrative support," said Lidar, "and the Davidson Center for providing the perfect venue." According to Lidar "almost all" the presentations are posted online at  http://qserver.usc.edu/qec07/program.html, with videos of the presentations available soon on the CQIST home page http://cqist.usc.edu/

Brun offered the following in-a-nutshell introduction to the field:

"Quantum computation, and other quantum information processing tasks, is severely limited at present by the problem of decoherence, or quantum noise.  The power of quantum computers depends on their ability to sustain large-scale superpositions--like Schroedinger's cat, which is both alive and dead, a quantum computer can simultaneously be in many different computational states.  Interactions between the computer and the external environment, however, produce decoherence, which rapidly destroys these superpositions.

"At one time this was thought to be a show-stopper for any practical quantum computation; but in 1995, [QEC presenter] Peter Shor and Andrew Steane independently showed that it was possible to design quantum error-correcting codes that could protect against decoherence, in a way analogous to how ordinary classical error-correcting codes protect data against ordinary noise.

"From this beginning, a broad theory of quantum error correction has emerged.  It has been shown that if the decoherence rate per bit can be reduced below a threshold, quantum computations of unlimited size become possible by the use of quantum error-correcting codes.

"This threshold is currently estimated as approximately one error per 10,000 elementary logic gates, though this is highly dependent on the particular choice of code and physical system.  However, quantum error-correcting codes are not the whole story.  Many other weapons against noise have also been discovered.  If the interaction with the external environment has certain symmetries, one can find decoherence-free subspaces and subsystems, which make the quantum computer immune to noise.

"One promising area is the study of the fractional quantum hall effect, in which ``quasiparticles'' in a two-dimensional electron gas may be useful for intrinsically fault-tolerant quantum computing.  The rapid growth of the field of quantum error correction is reflected in the large and diverse group who attended the conference."

Next steps: "Reactions from conference participants were uniformly very positive," said Lidar, "and many expressed interest in a sequel." 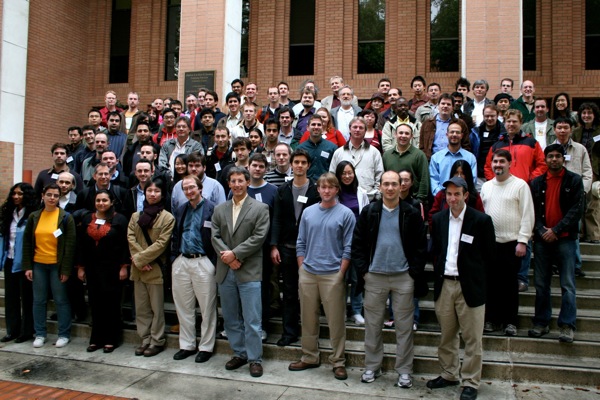