Eric Mankin
September 02, 2008 — Researchers came from all over the world to USC to attend the first workshop totally dedicated to an emerging scientific modeling technique the University and Viterbi School have played a key role in developing.

Roger Ghanem, a professor in the Viterbi School Departments of  Aerospace & Mechanical Engineering and Astani Department of Civil & Environmental Engineering was the organizer of the two-day gathering on "Opportunities and Challenges in Applying Polynomial Chaos Expansions to Engineering Design and Analysis," which brought together 51 specialists on August 21-22 under the sponsorship of USC and Sandia Laboratories.

Modeling - using mathematical expressions to simulate the behavior of complex systems - is a basic engineering and scientific tool, particularly significant for systems "where it is either not possible or extremely expensive to do actual physical experiments," Ghanem explained.

Examples include design and prognosis of advanced aircraft systems, prediction of behavior of nuclear waste in a depository, climate change, and many other areas.

But mathematics is exact and physical reality is messy. "The only thing you know about prediction," said Ghanem, "is it will never happen exactly as predicted."

"So how do we learn to live with and manage uncertainty?"  he continued.  "The trick is to predict the unpredictability, and to do so accurately enough that users can confidently use predictions from the the models."

Ghanem has been achieving increasing success in more than a decade of research using mathematical operators referred to in the conference title, "Polynomial chaos expansions," or PCEs for this purpose. PCEs are mathematical techniques for managing processes that work according to established physical rules, but which are subject to uncertainties, either about the rules themselves, or about how to best describe these rules mathematically.

Other USC researchers who have developed the technique are mathematicians Sergey Lototsky and Boris Rozovsky (Rozovsky, trained in Russia, recently moved to Brown University)  -- "USC has strength in both mathematical and algorithmic and computational elements relevant to these methods," Ghanem said.

The conference, he continued, was an effort "to bring together industry, national laboratories, and academia to scope out the state of the art." Industrial partners included the Siemens Corporation of Germany, Reaction Design, and the Berrie Hill Research Corporation.  Habib Najm, John Red Horse and Eric Phipps from Sandia worked with Ghanem as conference organizers.

In addition to Sandia, the Naval Research Laboratory and the Air Force Office of Scientific Research were represented, while academics attended not just from US schools like Stanford, Caltech and Purdue but also from universities in France, Germany, and Croatia. In addition to Lototsky and a number of USC grad students, modeling specialist Professor Dongxiao Zhang of the Sonny Astani Department of Civil and Environmental Engineering participated in the workshops.

PCE analyses have been part of previous workshops on modeling, but the August 21-22 event was the first one devoted solely to the new discipline, Ghanem said.  The workshop focused on three aspects relevant to these methods: Modeling, Algorithms, and Software.

According to Ghanem, the gathering demonstrated that the technique is close to breakout in several areas. First, devices are beginning to be made that incorporate PCE modeling in the design. Ghanem referred specifically to a presentation by Utz Wever of the Siemens Corporation describing a system designed to control a projected heads up display created by lasers reflected off a set of mirrors vibrating because of their location in a moving vehicle.

Another area is the creation of turnkey software tools so that engineers and scientists not specialists in PCE can use the technique on their problems.

Ghanem said midrange plans were to make the workshop an annual event, "with benchmark and showplace problems," and to incorporate, at least informally as a continuing group.

In the immediate future is a permanent PCE website -- to be established "here at USC," Ghanem promises. 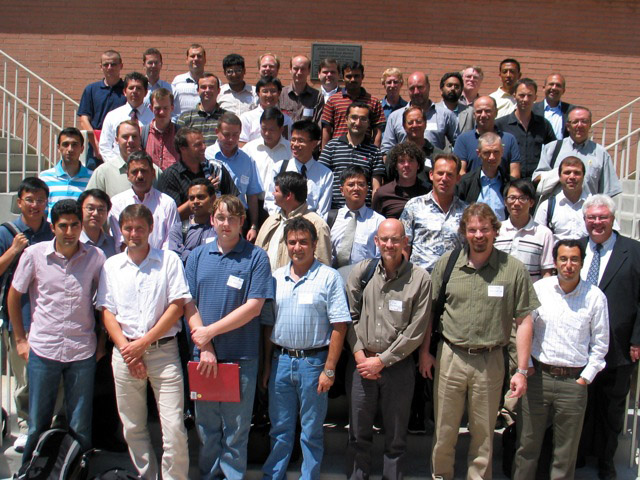