NSF's "Global Environment for Network Innovations" begins development spiral 1, with 29 institutions on board

The research and development firm of BBN Technologies is the main contractor for the Global Environment for Network Innovations (GENI) effort, working with 29 teams in universities and corporations all over the country. 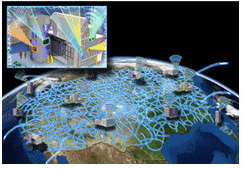 According to a September 29 announcement from BBN, "GENI prototyping will be conducted using a 'spiral development' approach, with simultaneous development and trials giving rapid feedback to help guide evolving designs. Spiral 1 focuses on ways to discover, schedule, and control resources for large-scale research experiments and to measure GENI capabilities.

"Multiple competing approaches are being funded to provide design insights for the evolving suite of experimental infrastructure. Successive spirals will refine and extend the GENI suite in response to the research community's evolving interests in network science and engineering."

"This first spiral will federate a wide variety of network research infrastructure," GENI Project Director Chip Elliott, "ranging from optical backbones to disk farms to sensor networks, with the very first prototypes up and running in six to twelve months."

Wroclawski has contributed to the creation of GENI since its inception. From 2005 through 2007 he was a member of the initial GENI Planning Group, co-chairing the associated Facility Architecture working group, and initiating the Planning Group's Project Management Team. He is an active participant in the ongoing GENI design process, and currentlyco-chairs the project's Control Framework WG.

The Control Framework Working Group's activity affects the whole spectrum of the GENI activity and design, and involves intensive collaborative effort not just among the members of the group but with the whole 29-team effort.

According to current working documents, the group will be examining the general question: "What are the requirements for operating GENI and managing its services? What are GENI's security requirements, both from a researcher's viewpoint and from that of its operators?" and will be working at deliver documents "that [describe] the high-level functions required for running the near-term GENI facility 24x7x365 with appropriate security and management safeguards for a research infrastructure. "

"We have a task that is demanding both from the technical side and the human side," said Wroclawski. "I am glad to be part of an excellent team."

Wroclawski is Director of the Computer Networks division at the USC Viterbi School of Engineering's Information Sciences Institute (ISI), with responsibility for the strategic guidance of this 40-person research organization. ISI's Computer Networks Division maintains an active program of research in areas such as sensor nets, network and distributed system security, Internet protocols and architecture, and space systems networking.

At ISI, he also serves as research director of the DETER testbed project, which has recently initiated new activities in such areas as large-scale risky experiment management and federation architectures.