Kempe said the contest attracted a tough field with 71 excellent teams from Southern California and Nevada. But Viterbi School

"These are excellent results on the part of the students. We beat a lot of very strong teams," said Kempe.  "Trojans had a chance to do even better, but (reasonably) gambled in the end to try for two more problems to win the contest, rather than one more to come in fourth."

Kempe continued: "I would like to take this opportunity to thank my fellow coaches, who put in a great amount of work into preparing the teams and accompanying them to the regional contest. They were Professor Sven Koenig and PhD students Kai Song and Marcos Vieira."

Kempe said the team is in a rebuilding mode "...since two of our coaches from the past have recently graduated or left."

"I would also like to thank UPE for their continuous help in organizing the contest, and our sponsors Language Weaver, Google, Northrop Grumman, Electronic Arts, Zero G Games, and Lockheed Martin."

More information about the competition can be found at http://www.socalcontest.org/current/index.shtml 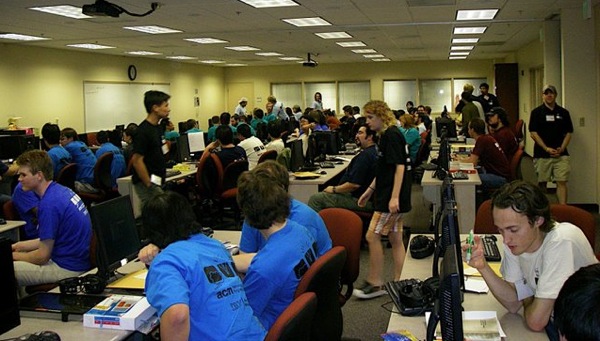 The ACM International Collegiate Programming Contest (ICPC) is a multi-tier, team-based, programming competition operating under the auspices of ACM and headquartered at Baylor University. The contest involves a global network of universities hosting regional competitions that advance teams to the ACM-ICPC World Finals. Participation has grown to several tens of thousands of the finest students and faculty in computing disciplines.  The competition includes teams at almost 2,000 universities in over 80 countries on six continents. The contest fosters creativity, teamwork and innovation in building new software programs, and enables students to test their ability to perform under pressure.