The concrete canoe team of USC’s chapter of the American Society of Civil Engineers returned from a weekend competition in Hawai’i not just with a tan, but with prizes.

The 20-member team, which competed with the theme “Gilligan’s Island,” took third place on final product – besting UCLA, one of the perpetual top three winners in the category.

“UCLA’s face when we beat them out for third, it was really awesome,” said Katie Hickey, a sophomore in Civil Engineering and the co-captain of the canoe team.  The judges “liked our theme, it also means our specs were good and we did a good job finishing. Some teams poured their canoes in October, so it felt good to get that (place).”

Supervision of the design was the responsibility of co-captain Trevor DeLuca, a junior. "Even though we had high goals going into the year, do to our lack of experience, getting to the podium wasn't really on our radar," he wrote in a wrap-up.  "It wasn't until we actually arrived at the competition that we realized how much ground we had made up on the other 16 teams in the region.

The canoe group began preparing for the competition in September, but it didn’t pour its canoe until February. Still, it was an improvement from 2008, when the team realized also in February that the mix wasn’t hardening and had to re-start the process. 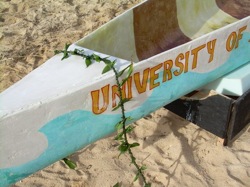 three teams (Cal Poly SLO, Cal Poly Pomona, and UCLA) that perennially compete for two spots to nationals," said DeLuca. "Beating out UCLA in the hardest category to compete in gives us confidence going into next year."

“We did quite well," said Hickey. "When the judge came and took measurements I asked ‘How does it look’ and he said ‘Honestly, you guys are spot on. You guys are right there.’ It was a big load off your shoulders.”

As part of the competition, the students also had to paddle in three different races. Since they’re more engineers than athletes, they didn’t do quite as well in that segment of the race.

“Some schools practice two, three times a week and have people doing the construction and other teams in the actual races,” Hickey said.

But it was important for the team — and the seven other schools who shipped their projects along with USC’s — to make sure the canoes and bridges arrive safely.

To compete in the cement canoe challenge, students have to design and build a canoe that floats with a mixture of concrete  aggregate and water. The canoes have to be shown to float before competing in three canoe races.

An already experienced sophomore, Hickey joined the canoe team in her freshman year, when there were no old timers who could help guide the rookies on the intricacies of building a cement vessel that could float. Wanting to build institutional memory, Hickey decided to stay another year in the team and recruit young civil engineers willing to be part of the process more than once. It paid off. 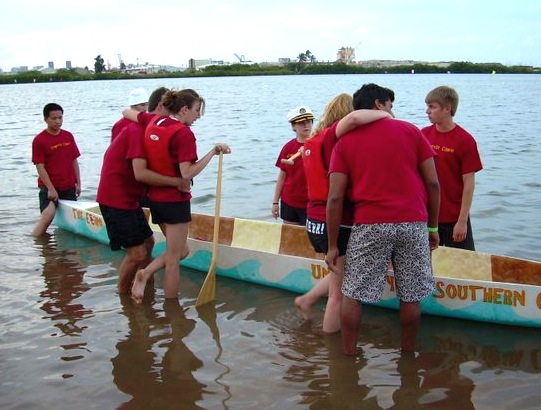 "I was hesitant at first going into the year because I had seen previous captains and the stress that the competition had caused them," said DeLuca. "Luckily, this was the first year that the CE student body sort of got behind us and helped out.  Instead of having five or six people working on the canoe at any given time, we sometimes had upwards of 18 to 20 people helping out.  This cut down on the hours that people had to put into the canoe individually and allowed Katie and me to hammer out the detail work."

“This year’s canoe had to withstand the rigors of multi-modal and ocean transport to get to Hawaii, rough handling during racing and then the trip back to USC,” said Lance Hill, lab manager for the Department of Civil Engineering, in an email interview. “Very few past canoes could undergo that kind of mistreatment and come out in one piece like this year's canoe. Yet it was light enough to float on water and strong enough to carry four people.”

Hickey’s already planning to continue in the cement canoe team next year and reach out to faculty members to help with the process. And even though this year’s performance turns the pressure on, the budding civil engineer feels the process will nonetheless be easier.

“There are things we know we can do now, we got our measurements right. We can use a similar mold system, that way we don’t have to think about that but we can work on the concrete mix to make it more lightweight. “

The winning canoe is scheduled to return from Hawai’i in the next couple of weeks and it will be on display somewhere in the Viterbi School.

When forty engineering students departed on April 1 to participate in the 2009 Pacific South West Regional Conference of the American Society of Civil Engineers, their canoe and bridge were already waiting for them in Hawai’i. 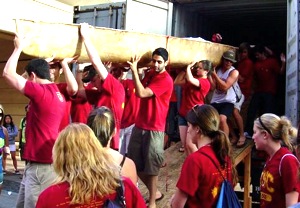 Added to the challenge of designing and building sound structures, this year the students had to add another hurdle: how to safely transport a concrete canoe they’ve been working on since September across the Pacific Ocean.

Hickey arranged the logistics of hiring three 45-feet containers that could be transported to the nearest port for safe shipping to the University of Hawai’i Manoa, where the competition took place. “It was an entire different project,” said Hickey. “It took a couple of months to put together.”

"Overall, canoe has been a great experience for me," wrote DeLuca. "Not only has it vastly supplemented my course work, but it has also given me real world experience that I could not have gotten from class alone.  The issues that we, as a team, had to deal with parallel exactly what I expect to see when I start my career.

"Being one of the captains on the team also allowed me to work on my management skills and this is something that companies definitely like to see when hiring.  Not only has the concrete canoe team enhanced my USC experience, but it has also helped me to be prepared for life after USC."

Next year: "Katie is going to stay on as one of the captains," DeLuca continued. "My plan for next year is to help out with the ASCE steel bridge team which could definitely use the same sort of push that we gave the canoe team this year."