CiSoft Reaches out to ELAC Freshmen in Daylong Event


August 07, 2009 — Fifty students from East Los Angeles - most of them incoming freshmen at East Los Angeles College, but some still in high school - came to the Viterbi School for a look at career opportunities in engineering.

The event was co-sponsored by CiSoft, the Chevron-funded Center for Interactive Smart Oilfield Technologies, headquartered at USC. Professor Armando M. Rivera of ELAC worked with CiSoft co-director Iraj Ershaghi to organize the program, which occupied most of a summer day in a DEN electronic classroom in Olin Hall.

Keynoting the event was Dr. Don Paul, formerly of Chevron, now the leader of the USC Energy Initiative. Paul spoke about the importance of engineering as a profession in maintaining civilization, asking the students to think about what would happen if no one were trained to build and maintain bridges, water systems, to design and build vehicles and ships, and more.

He pointed out that the demand for such skills would be increasing in the future, encouraging his audience to think about being part of that labor force, and then went on to survey specific fields in the area of energy that were likely to expand in the near future.

Paul was followed by a full program including presentations by two young engineers from Chevron and Chevron executive Warner Williams, leading to a series of talks by Viterbi School professors.

The day ended with a talk by Viterbi admissions officer Christine Hsieh, who explained how ELAC students could shape their studies to aid in admission to the Viterbi School - noting that the all applications automatically included applications for financial aid.

Students seemed receptive. Eileen Rios was attracted by the possibility of becoming a bioengineer, after hearing about efforts to turn algae into fuel.

Magdalia Flores (pictured above) said, "The nanotechnology presentation kindled me to follow an engineer path."

Tyare Mireles said, "I want to become an engineer. I want to help solve problems that will benefit the modern world. And with the social crave for technology, we need more engineers."

When asked about current obstacles, Chioma Ekeomodi answered, "Mainly the cost of attending a big/private university is what is really daunting."

Jose Marquez said, "I think the presentation that inspired me was the Chevron presentation because energy is a part of an industry that will always be in demand."

Iomara Guzman, Randy Mejia, Jennifer Quinto, and David Solis all agreed that information about internships would be really helpful in choosing a major and career. 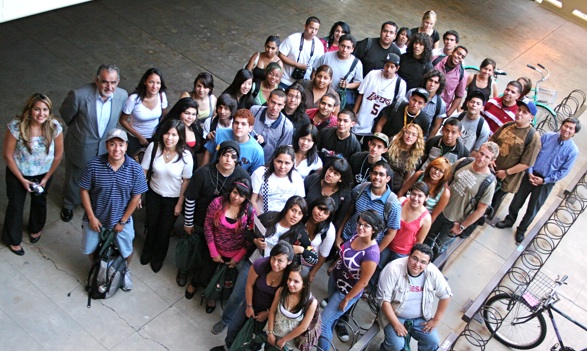