An explosive idea called Building Information Modeling, BIM, is revolutionizing the oldest engineering discipline, and a young professor who arrived at the Viterbi School this year carrying its flag has just taken a big step towards make USC a growing interdisciplinary center for its study and practice.

Burcin Becerik-Gerber believes the foundation for what she hopes will be a vibrant effort came out of a highly successful meeting, in which industry professionals signed on to be part of ongoing USC research and development in the field of advanced uses of information technology.

Karen Kensek of the School of Architecture, who last summer won the Autodesk Revit Building Information Modeling Experience Award, was co-organizer and co-host of the event, held under the auspices of the AEC, an umbrella group of Architects, Engineers and Construction professionals

She cites a striking statistic to illustrate the problem BIM attacks, and its possible impact:   Non-farming manufacturing industries in the US have doubled their productivity between 1964 and 2003, while in 2001, the construction industry declined to about 80% of its efficiency in 1964. (see chart, right) 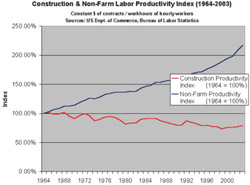 Becerik-Gerber says BIM technology (AutoDesk, Graphisoft, Digital Project and Bentley are among the leaders) and, no less important, encouragement of new ways for companies in different parts of the construction process to work together, is changing these dismal numbers.

It began, she said, about a decade ago, and has accelerated in recent years with use in celebrated structures such as the Beijing Olympics Stadium and the Los Angeles Walt Disney Concert Hall. It is being used now on the USC campus in the Cinematic Arts Complex project.

But she emphasized BIM is not just technology but also a process. The working-together part is critical for the application of BIM technology -- and the daylong event hosted by Bercerik-Gerber and Kensek was an illustration of the process.


Participants discussed the advanced uses of information technology in architecture, engineering and construction, how these technological solutions can bring efficiencies to the industry's operations and enable/support sustainability.

One of the issues raised was changes in the business and economics aspect of construction, grouped under the heading of Integrated Product Delivery, or IPD. Crucially, BIM / IPD encourage all participants on a project to make agreements that emphasize common interest rather than competition.   This does involve a mind-shift for many people from a highly competitive industry, says Bercerik-Gerber – but members of the community are now realizing the benefits.

Feedback from the event was highly positive. “Very important subjects, well discussed by some really smart folks,” one comment begins, before going into technical issues.

“This experience has been eye opening in many ways and given me and my company a direction in which to point our efforts for self growth and sharing with your program,” says another.

The meeting, successful as it was, is only the beginning of a process, Becerik-Gerber emphasizes. In the coming months, after analyzing workshop findings, the Astani Department and School of Architecture will initiate three projects based on the experience and needs discovered, to be researched over the next year with USC resources and researchers.

“We are establishing a common ground,” says the young researcher, who came to the Viterbi School fresh out of Harvard – one that looks like it will be producing an intriguing harvest.

BIM and IPD were also the focus of a major event, the Astani AGC Symposium the same day, featuring Frank Gehry, whose Gehry Technologies is a leader in BIM technology. (see accompanying story).