Teaching Science: Why Not Do It Scientifically?

Nobel Laureate Carl Wieman brought his message that current methods of teaching subjects like physics, chemistry and engineering are wrongminded and inefficient to about 100 USC faculty members -- and left behind continuing interest.

Sponsored by the Viterbi School, the College of Letters Arts & Sciences and the USC Center for Excellence in Teaching, the 2001 physics prizewinner was introduced by Vice Provost Gene Bickers.

He immediately began documenting how the traditional science lecture delivered to quiet notetakers was at loggerheads with cognitive theory and brain research.

Wieman is a professor at the University British Columbia where he heads the Carl Wieman Science Education Initiative, is the chair of the board of science education at the National Academy of Sciences and winner of numerous teaching prizes, including the Oested Award and the 2004 Professor of the Year Award. He has been systematically spreading his message of science-based science education for years, at the University of Colorado Boulder where he founded and still works with the Physics Education Technology Project.

Learning a discipline like a science requires not just mastery of information details, he said, but actual brain change. Tests on students in lectures consistently showed dismally low rates of assimilation of information — rates that remain low regardless of the the skill of the lecturer and the talents of the students.

Part of the problem is the instrinsic difficulty of the material. Learning to be a scientist requres thousands of hours of work, in adapting thinking to the discipline.

Wieman for years has been attempting to develop a new model of instruction, one that he believes is more attuned to human abilities, one that involves direct feedback between large groups of student and the lecturer with "clickers" (which allow instant response to problems presented on a display), and subsequent division of large lecture audiences into small teams 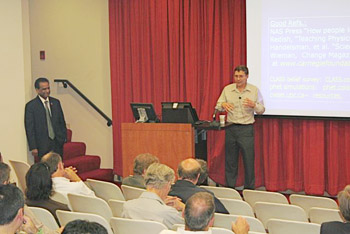 to discuss and attack the problem. The system is partially based on the work of fellow-physicist Eric Mazur, called Peer Instruction.

Such technques, said, consistently produce far better results — though each subject has to be customized to the techniques.

According to Bickers, a number of teachers at USC now use these methods in the college deparments of chemistry, notably Professor Chi Mak and physics, and the USC Center for Scholarly Technology

After the lecture -- delivered without clickers -- Wieman met with a number of interested faculty to explain his work further, working with Viterbi Senior Associate Dean for Strategic Initiatives Cauligi Raghavendra, who said the School is working with the college on a physics course, and a number of Viterbi faculty already employ clickers in their classes.

Click here to view a webcast replay of the speech

A webcast of an earlier version of Wieman's speech can be viewed at: http://www.tag.ubc.ca/about/institute/CarlWiemanVideocastNov.212005.php