It looks like a tiny purple blowtorch, but the pencil-sized plume of plasma on the tip of a small probe remains at room temperature as it swiftly dismantles tough bacterial colonies deep inside a human tooth. (Click on image to see video of probe in action). 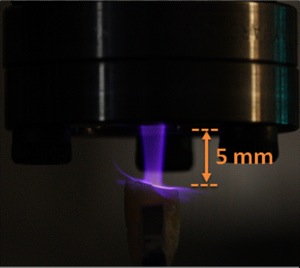 Two of the study’s authors are Chunqi Jiang, a research assistant professor in the Ming Hsieh Department of Electrical Engineering-Electrophysics, and Parish Sedghizadeh, assistant professor of clinical dentistry and director of the USC Center for Biofilms. “Nanosecond Pulsed Plasma Dental Probe” appears in the June issue of Plasma Processes and Polymers.

Sedghizadeh explained that biofilms are complex colonies of bacteria suspended in a slimy matrix that grants them added protection from conventional antibiotics. Biofilms are responsible for many hard-to-fight infections in the mouth and elsewhere. But in the study, biofilms cultivated in the root canal of extracted human teeth were easily destroyed with the plasma dental probe, as evidenced by scanning electron microscope images of near-pristine tooth surfaces after plasma treatment.

Plasma, the fourth state of matter, consists of electrons, ions and neutral species and is the most common form found in space, stars and lightning, Jiang said. But while many natural plasmas are hot, or thermal, the probe developed for the study is a non-thermal, room-temperature plasma that’s safe to touch. The researchers placed temperature sensors on the extracted teeth before treatment and found that the temperature of the tooth increased just five degrees after 10 minutes of exposure to the plasma, Jiang said.

“Atomic oxygen [a single atom of oxygen, instead of the more common O2 molecule] appears to be the antibacterial agent,” according to plasma emission spectroscopy obtained during the experiments, she said.

Sedghizadeh said the oxygen-free radicals might be disrupting the cellular membranes of the biofilms in order to cause their demise and that the plasma plume’s adjustable, fluid reach allowed the disinfection to occur even in the hardest-to-reach areas of the root canal. Given that preliminary research indicates that non-thermal plasma is safe for surrounding tissues, Sedghizadeh said he was optimistic about its future dental and medical uses.

“Plasma is the future,” Sedghizadeh said. “It’s been used before for other sterilization purposes but not for clinical medical applications, and we hope to be the first to apply it in a clinical setting.”

“We believe we’re the first team to apply plasma for biofilm disinfection in root canals,” Jiang added. “This collaboration is unique. We’re attacking frontier problems, and we’re happy to be broadening our fields.”

The next step will be clinical trials on dental patients, according to Jiang.