This is Not (Just) a Game 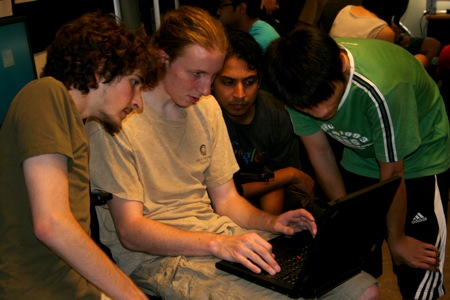 Professor Michael Zyda of the Computer Science Department believes that the CS undergraduate major specializing in computer game development has attracted students and provided them with a firm foundation in computer science principles, while helping the graduates to succeed in the game industry..

The CS games major in the Viterbi School's Department of Computer science has shown continuing growth while providing students with skills, experience, and contacts.

A Computer Science (Games) Bachelor’s degree is designed to provide both solid grounding in computer science and cross-disciplinary background in game development. Professor Zyda believes that this educational emphasis strengthens the department's ability to conduct cutting edge computer science research for undergraduate students in addition to enabling graduates to be successful in the game industry.

Students participate in a full development pipeline similar to what they might experience in the industry. Final game projects are built by an interdisciplinary team including students in Interactive Media, Animation, Music, and Fine Arts working together in the GamePipe Laboratory.

Students now have the opportunity to exhibit their games to over 40 industry representatives, including such household names as Sony and Disney.

Zyda says that the program leads directly into internships and jobs. “Students know they should come here to fulfill their dreams.”

Success stories include that of USC’s relationship with Electronic Arts (a leading independent developer and publisher of video games) which has recruited from the Game Development program for the last four years. USC students now make up a third of the company’s total intern hire.

Zyda himself along with former PhD students was involved in creating the highly successful first person shooter game America’s Army which in successive iterations has been downloaded more than 46 million times, and had 9.7 million registered users as of February 2009.

Graduates of the program have also been involved in developing such popular games as Gears of War (5.8 million copies sold), World of Warcraft (more than 11 million subscribers), and Call of Duty (more than 13 million players).

In addition to engineering next-generation games and simulations, graduates of the USC Game Development program have proved innovative in the career and business models they adopt. Thirteen recent graduates have formed start-up company Happynin’ Games to develop iPhone applications with their first product to ship this January. Zyda describes the opportunities available to graduates of the USC Computer Science (Games) program as “more than a job--it’s a big future.”