A team of USC undergraduate engineering students won third place at the Design/Build/Fly Competition sponsored by the American Institute of Aeronautics and Astronautics.

All of the radio-controlled planes had to be powered by electric motors and batteries, and all had to be designed and built to achieve

several ground and air missions.  Originally  65 teams entered the competition; 54 from the United States and 11 from abroad; but due to the rigors of the competition, only 41 planes showed up for the flying contest.

Prior to flying, each team had to pass a  technical and safety inspection that certified them to be flight worthy. Each plane had to be housed in two boxes each less than 2'x2'x4'.  The teams were required to assembly their planes in a timed assembly.   The total weight of the plane and the two boxes was multiplied by the assembly time and was used in the calculation of  the final score. That is, the flying scores were divided by the assembly time and weight to obtain the final flight scores.

Thus the planes with the smallest weight and assembly times realized an advantage in the final scoring. In addition, each plane could have no more than four pounds of batteries for propulsion and all the components of the planes had to be accessible off the shelf.

The flights were around a set course between two pylons 1000 feet apart with a 360̊ turn during  the down wind flight. There were three different flight missions each requiring a take off distance within 100 feet. The first mission was a speed mission required a timed flight of two laps with a large gallon bottle under the fuselage that added considerable drag to the streamlined plane. The second mission was a weight lifting mission with the same configuration as in mission #1 but with the bottle full of water weighing 8.8 pounds. Four laps were required to complete this mission.

The third mission had the planes take off within 100 feet with four rockets, each weighing 1.5

pounds, under the wings.  The inboard rockets had to be at least 24" from the centerline and the two out board rockets were 30" from the centerline. After one lap, the plane had to land and remotely drop one rocket in a specified area. Then it had to take off with the asymmetrical load of three rockets  and fly one lap, land and drop another rocket in the same area. This was repeated until only one rocket remained on the last lap.

USC’s entry fared very well in the flying. The plane weighed only 6.2 pounds without the batteries and had the fastest time in Mission #1 of only 64 seconds. It was only one of three planes to successfully complete the grueling Mission #3. Two planes from Oklahoma State University placed 1st and 2nd. USC’s entry was third ahead of M.I.T. and the University of California at Irvine. The competition was held near Tucson, AZ on April 16-17, 2009 on a model airplane airfield.

At least half of USC’s team members are in the Aerospace Engineering program, but several MEs, ISEs and others are on the team. Program Manager Caitlyn Fahey and Chief Engineer Tanner Yaberg were team co-leaders; Wyatt Sadler was the pilot, Cesar Valladares served as the Program Administrator, Ben Reader was the group captain for propulsion, Dan Orr was in charge of the landing gear, Geoff Martindale supervised the construction of the plane, Nazareth Escobedo was the test flight coordinator, Matt Pieper was in the captain of the payloads group, Shanling Yang was the captain for aerodynamics and stability & control and Joe Oorebeek was the structures captain.

USC's participation in this project is an outgrowth of an effort by the Viterbi School Department of Aerospace and Mechanical Engineering to provide a hands-on design experience to interested students that will continue over the entire four years of their education. Thus the team includes all classes, freshmen through seniors and most of them with at least one year of experience.

The students spent the first semester designing the plane and held a Preliminary Design Review on October 20, 2008 and a Critical Design Review on December 8, 2008 before eight engineers invited from industry. Some testing and construction began in December with a prototype plane finished in January. Composite materials were used  to reduce the weight of the airframe. Several test flights were accomplished in February and  March. The competition plane was completed in early April. Twenty four USC students made the trip to Arizona for the competition.

In addition to the Viterbi School and USC, the team's efforts have been generously supported by the Skunk Works division of the Lockheed Martin Corporation with help also from the Boeing Company, the Northrop Grumman Corporation and the Raytheon Company. "Their support is greatly appreciated," said Blackwelder. 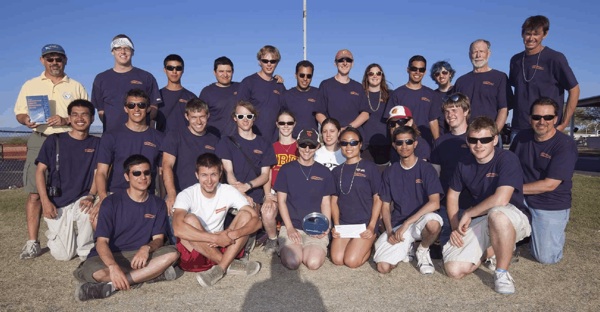