A recent rash of well-publicized breaks in water mains in Southern California disrupted commutes and destroyed streets.  Now, the Viterbi School's Professor Jean-Pierre Bardet, director of the USC Center on Megacities, will lead an effort to find causes. 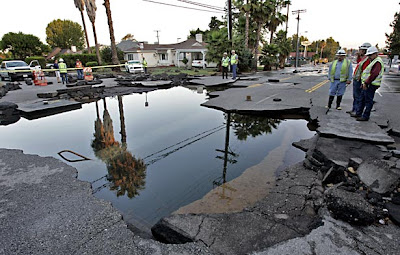 The action came after a Sept. 23 meeting of the LA City subcommittee on Energy and the Environment, led by Councilwoman Jan Perry, heard Los Angeles Department of Water and Power testimony and recommended an in-depth analysis of the factors affecting pipeline breaks to be performed by independent experts.

Bardet, chair of the Viterbi School's Astani Department of Civil and Environmental Engineering, will be performing this analysis, working with researchers at  Cornell, and coordinating with a group at Jet Propulsion Laboratories.

"We will be casting a very wide net," promised the professor.

According to Bardet, the research agenda includes meetings with LADWP personnel, visits to sites of water main breaks, statistical study of water system characteristics (pipe diameter, thickness, age and other parameters) and cross-system comparisons of the LADWP experience with that of other water suppliers in large urban areas including Northern California, Portland, San Diego, Washington D. C., and New York.

Bardet and others raised the possibility during the initial reportage of the breaks that strains caused by limiting lawn watering to two days a week may have played a role in the breakages.

His group will study this possibility, but he emphasizes that it is only a possibility, noting that  breaks took place in other Southern California systems that did not impose watering restrictions.

"We are not in any way prejudging the issue," said Bardet. "We are finding facts, not assuming them."

Bardet's research will use a computer simulation/decision support system created by Cornell's to model and analyze stresses on the pipe network.

"We believe we have the tools to both better understand what is going on, and to find effective ways to prevent recurrence of these unfortunate incidents," said Bardet.