Kimberly Boynton, the Viterbi School valedictorian this year, is an expert in balancing multiple

roles. When she graduates, she will be earning a bachelors’ and masters’ degree through the progressive degree program, which she completed successfully along with a slew of extracurricular activities.

The civil engineering major from Troy, Michigan wants to make a career in structural design and has already begun working with Los Angeles based firm John Martin and Associates, where she interned last summer.

“I always felt I wanted to go away to college and one of the best things I liked about coming to USC was that I could take some classes in the School of Architecture,” said Boynton.

During her time on campus, Boynton was president of Chi Epsilon, a civil engineering honors society, and was active with the American Society of Civil Engineers, where she participated in a steel bridge project.

She was also a member of the Astani Department team that took third place in a “Leadership in Energy and Environmental Design” (LEED) contest held under the auspices of the Associated Schools of Construction in February, 2009.

Probably the activity she enjoyed most was twirling with the marching band. Boynton, who has been twirling since she was six, has performed on television shows and at four Rose Bowls and has even traveled to Brazil and Italy with the Trojan band. “My best memories of campus are about the band. I even met some of my closest friends on that trip,” said Boynton. (see image below of Boyton at Stanford game)

She got several scholarships and awards during her time at USC. She entered college as a trustee scholar, got a grant from Chi Epsilon, and was recently awarded the Archimedes Circle Award for Outstanding Achievement in Scholarship, from Viterbi. As part of American Society of Civil Engineers, she travelled to Hawaii. Boynton also attended the Viterbi Overseas Program, spending seven weeks in Paris.

But she’s not one to rest on her laurels. “USC was a lot of fun and now that I am working, I’m enjoying myself even more. While interning at the company, I realized I have a lot to learn. What we learn in school is theory-oriented and it takes a lot to put it into practice,” she said.

Like most new students, Boynton had to overcome several challenges when she moved to LA. “When I first came here, it was difficult to adjust. There were so many different people and so many activities. I had to learn to juggle everything successfully. I had to make sure I studied enough and kept my grades up even while taking responsibility in different organizations,” said Boynton.

She said she got involved in most of her extracurricular activities in the last two years of college, but remembered to plan her time well. “My parents were always supportive. They knew I could handle the load. And I knew what to take on,” said Boynton, who loves to run when she has some time on her hands.

She said the valedictorian award came as a complete surprise to her and her parents. “We were all pleasantly surprised. Initially my dad was not sure if he was going to attend the graduation ceremony but after he got the news, he booked the tickets immediately,” she said.

story and photo by Newly Paul 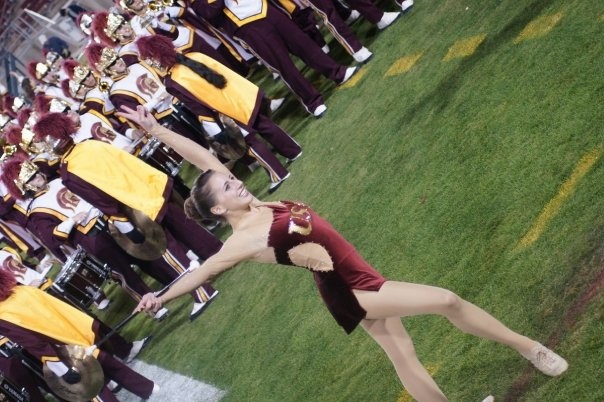