Almost Half of Injured Haitians are Children, Study Finds

A statistical study by a specialist group at Childrens Hospital Los Angeles and the University of Southern California indicates that the victims of the January 12 quake include an extraordinarily high number of children— more than 110,000, nearly half of the estimated total. 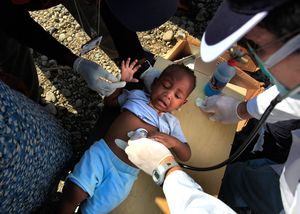 This information should guide relief workers on the ground, according to Jeffrey Upperman, M.D. and Robert Neches Ph.D., co-developers of the Pediatric Emergency Decision Support System (PEDSS), a software tool to help medical service providers more effectively plan for, train for, and respond to serious incidents and disasters affecting children.

The PEDSS group has set up a blog to help guide the choice and distribution of relief supplies. The numbers are if anything understated, according to Neches, but the calculations use the latest available reports from relief efforts on the ground.

PEDSS uses statistical methods to estimate how many of the potential victims of a disaster (so far, earthquakes have been most studied) in a given specific location (i.e., Los Angeles) will be children, and what they will need. Children have special needs for equipment, including thinner hypodermic needles, appropriate pharmaceuticals in children's dosages, medical specialists in pedriatics and in other areas.

Such needs in Haiti are particularly intense, because fully 35 percent of the population is under 15, meaning the estimated total number of injuries (250,000) contains far more children than it would in other areas.

PEDSS software tools work with seven age groups, ranging from 0-1 month up to 12-18 year olds. Applied to Haitian demographics they predict that injuries to persons under 18 make up nearly half of the total —111,000.

The same report details how many injuries are expected for each of 11 diagnoses, ranging from abdominal trauma to spine injury, in each of the age groups. Thus, for example, the model estimates that about 1000 children aged 6-8 suffered crush injuries.

The software then uses these numbers to predict which medications and supplies each victim group would require. Thus, for treatment of the numerous crush injuries projected the program lists the drugs required and totals the amounts needed. The crush list begins “Calcium Gluconate 1 g/10mL  -- 265263.0" doses. Such estimates can help relief organizations procure the right supplies in the right quantities.

Upperman’s immediate superior at Childrens Hospital is Dr. Henri Ford, vice president and chief of surgery, who is also vice dean of medical education for the Keck School of Medicine of USC.  Ford is of Haitian descent, and is now in Haiti.

While preparing Ford for what to expect, Upperman asked Neches about the feasibility of turning the PEDSS system, which the pair began developing in 2006, to focus on the post-earthquake emergency. Neches mobilized a team at the USC's Information Sciences Institute (ISI).  Combining information provided by Childrens Hospital Miami and the CalTech Seismology Center with their own research, the team made the necessary changes and was producing results in days.

Neches is a research associalte professor in the Viterbi School Department of Computer Science as well as a division director at ISI specializing in command-and-control computer systems designed to help decision-makers allocate resources in emergency situations.

The U.S. Department of Health and Human Services appropriated $1 million in 2007 to support the effort, which is now working through a web interface with emergency service providers nationwide. Los Angeles County has supported work on the L.A. area earthquake module, which ihas become a model for parallel modules for other quake-prone areas.

In addition to Neches and Upperman, CHLA epidemiologist Rita Burke and ISI researchers Tatyana Ryutov, Craig Milo Rogers and Venkata Pingali worked on the Haitian studies. The PEDSS team is actively sharing the current results, methodology and software with colleagues and users.

"Children are one of the groups most vulnerable to disasters," says a recent U.N. report.  "More than 10 000 schools were destroyed in Pakistan during the 2005 earthquake and many others by this year’s Hurricane Felix in the Caribbean, and by the recent floods in Uganda. Approximately 34 million children worldwide are attending school in areas threatened by earthquake risk. Millions of other children are threatened by volcanoes, hurricanes, drought, wildfires, storms and floods."