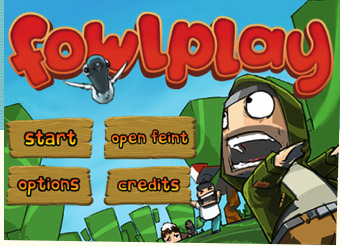 In the game, players take to the skies in the form of pigeons flying over a park, carrying on a "rain of terror" against the humans below.

Players earn points and combos for dodging trees and successfully hitting the targets below. Power-ups can be collected to give the pigeon new powers such as ‘fire’ and ‘invincibility’ for a limited time. But the better the player does, the faster the pigeon flies!

The game includes a feature, OpenFeintTM integrated, allowing players to easily share their high scores and challenge their friends and families around the world.

The newly formed startup, Happynin Games, was founded by 12 graduates of the USC GamePipe Laboratory program, and fowlplay is the company's first title.

“The development team on this has done an outstanding effort and produced one of the best 3D games on the iPhone to date”, said Michael Zyda, CEO of Happynin and Director of the USC GamePipe Laboratory. fowlplay was based on a PC game built for the CS-491A Final Game Projects course and its PC version demo is here.

The iPhone version of fowlplay offers simple controls, stylized 3D graphics, and has a host of new content planned for updates.. The game is now available worldwide on the App Store for download. For more information, including downloadable media assets, visit www.happynin.com.