The Science and Technology Adviser to the Secretary of State, Dr. Nina Fedoroff, introduced each of the Fellows

In a ceremony in the George C. Marshall room at the U.S. Department of State, Secretary Hillary Rodham Clinton honored Najmedin Meshkati and the other nine  2009-10 Jefferson Science Fellows and thanked them for their service in the State Department and the Agency for International Development (USAID). 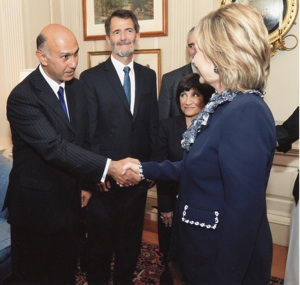 Jefferson Science Fellows are tenured faculty in areas of science and engineering who are nominated to the program by their universities. After a rigorous selection process by the National Academies of Science, Fellows serve in the State Department or USAID full-time for one year and for an additional five years in a consultancy capacity.

Meshkati, of the Viterbi School's Astani Department of Civil & Environmental Engineering and its Epstein Department of Industrial & Systems engineering, worked in the Office of the Science and Technology Adviser to the Secretary on science and engineering diplomacy initiatives for partnership creation, capacity building and conflict resolution, especially with countries in the Middle East. These include integrated technical and policy-based systems-oriented frameworks to improve the safety and reliability of complex, large-scale technological systems, such as civil aviation, nuclear power, and (upstream and downstream) oil industries.

“Professor Meshkati is a world renowned expert in aviation and industrial and nuclear safety,” said USC President C. L. Max Nikias. “His outstanding leadership as a Jefferson Fellow reflects the commitment of the USC community to give back to society in meaningful ways. His contributions inspire us all.”

Meshkati has just been appointed to an NAE-National Research Council team probing the Gulf oil spill.

The Science and Technology Adviser to the Secretary of State, Dr. Nina Fedoroff, introduced each of the Fellows to Secretary Clinton, highlighting their area of expertise and enumerating their accomplishments over the past year.

In her remarks, Secretary Clinton congratulated the Fellows, emphasized the need for scientific and technical expertise in government, and inquired about the most significant experience and contributions the JSFs have made to the missions of the U.S. Government foreign policy establishment.

Dr. Rajiv Shah, Administrator of USAID, also spoke to the Jeffersons and the gathered audience of guests and dignitaries. He remarked that one to two billion people worldwide live near or below the World Bank’s poverty level and face many challenges. He said to alleviate this situation requires innovation, new scientific discoveries, and creative development ideas, which is why the Fellows play such an important role in fusing science and engineering into foreign policymaking.

Also speaking in praise of the Fellows, Dr. Kerri-Ann Jones, Assistant Secretary for Oceans, International Environmental and Scientific Affairs, echoed Secretary Clinton’s sentiments and underscored the vital role of science and technology in accomplishing the complex challenges that transcend borders, ranging from climate change and global health to energy security.

“Najm has made the most of this opportunity to share his expertise with the Secretary and others at the federal level, added Viterbi School Dean Yannis C. Yortsos. “A role model for students and colleagues and a fine ambassador of USC and the Viterbi School, Najm now brings the rich benefit of his first year of participation to the curriculum. In this new light he'll continue to foster the diplomatic and technical development of the next generation of engineers with characteristic enthusiasm and skill.”

The Jefferson Science Fellows program was an initiative of Dr. George Atkinson, predecessor to Dr. Fedoroff, to provide additional opportunities for engaging the American academic science and engineering communities in U.S. foreign policy. JSFs are tenured faculty members in scientific and engineering disciplines at U.S. universities who work at State or USAID for one year, then remain available as experienced consultants for short term projects for a minimum of five years after returning to their academic chairs.

This program was launched in 2003 as a three-year pilot program funded through a public-private partnership between U.S. universities, which pay the Fellows’ salaries

and benefits; two philanthropic foundations, the MacArthur Foundation and the Carnegie Corporation of New York, which funded stipends for the Fellows and administrative costs; and the Department of State. With the 2007-2008 Fellows being the fourth cohort, the process of institutionalizing the program within State was begun. The two foundations provided partial bridge funding until FY2010; now the costs formerly covered by the foundations are fully borne by State.

The program is administered by the National Academy of Sciences, which oversees the selection process. JSF assignments are made through mutual agreement between the prospective host office and the Fellow, considering the interests and expertise of the Fellows and the needs and opportunities of the office. A few JSFs have also served brief stints in U.S. embassies overseas. There are now 31 JSF alumni who preceded the ten incumbents. Twelve new Jeffersons will be interviewed in August for assignments that begin in September.