The challenge: build a computer program that can understand language well enough to compete on TV's Jeopardy! quiz show

Facutly from the Viterbi School of Engineering Information Sciences Institute are among scientists from eight universities who worked with IBM to advance the Question Answering (QA) technology behind the IBM Watson computing system.

Watson, named after IBM founder Thomas J. Watson, was built by a team of IBM scientists who set out to build a computing system that rivals a human’s ability to answer questions posed in natural language with speed, accuracy and confidence. The Jeopardy! format provides the ultimate challenge because the game’s clues involve analyzing subtle meaning, irony, riddles, and other complexities in which humans excel and computers traditionally do not.

“IBM Watson is the first step in how computers will be designed and built differently and will be able to learn and with the help of USC, we will continue to advance the QA technologies that are the backbone of this system,” said David Ferrucci, leader of the IBM Watson project team.

Watson's ability to understand the meaning and context of human language, and rapidly process information to find precise answers to complex questions, holds enormous potential to transform how computers help people accomplish tasks in business and their personal lives. Watson will enable people to rapidly find specific answers to complex questions. The ongoing research collaborations will help advance Watson's ability to improve all kinds of industries such as healthcre, banking, goverment, etc.

Viterbi School scientists are developing theories and computational techniques to help systems understand texts at a deeper level than is possible today. This work includes linguistic analysis of sentences, the collection of large amounts of background knowledge from the web, and the application of reasoning engines that draw conclusions from facts extracted from questions and possible answers. 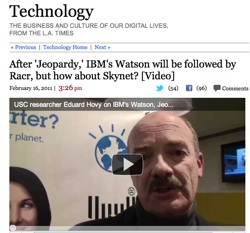 "For the first time," Hovy continued, "there is a computing system that analyzes natural language and other language complexities in which humans excel at understanding and computers do not. In this case, IBM has designed a learning system that can analyze information and respond to questions. It's the next stage in computing." Hovy was quoted in reports on Watson that appeared in the L.A. Times, Wall Street Journal, and other media.

The University of Southern California's Viterbi School of Engineering is a leading research institution, with scholars, students, and visitors from around the world. Its Information Sciences Institute has one the world's strongest programs in artificial intelligence.

For more information about the Watson computing system and the Jeopardy! challenge, please visit: www.ibmwatson.com.

Hovy and Hobbs were interviewed earlier about the significance of Watson. Click on the link below to hear their views.