They were the first USC team ever place in the more than 30 year history of this highly completive and prestigious contest, which annually attracts more than fifty entries from the all over the world. While most of the team members were students in the Viterbi School of Engineering Department of Aeronautical and Mechanical Engineer, the roster also included members from USC's School of Architecture and its College of Letters, Arts and Sciences,

In the 2009-2029 timeframe, it is predicted that there will be a demand for 21,000 new aircraft with an estimated market value of $1.7 trillion (Boeing Market Forecast, Oct. 2010). This large market potential has resulted in 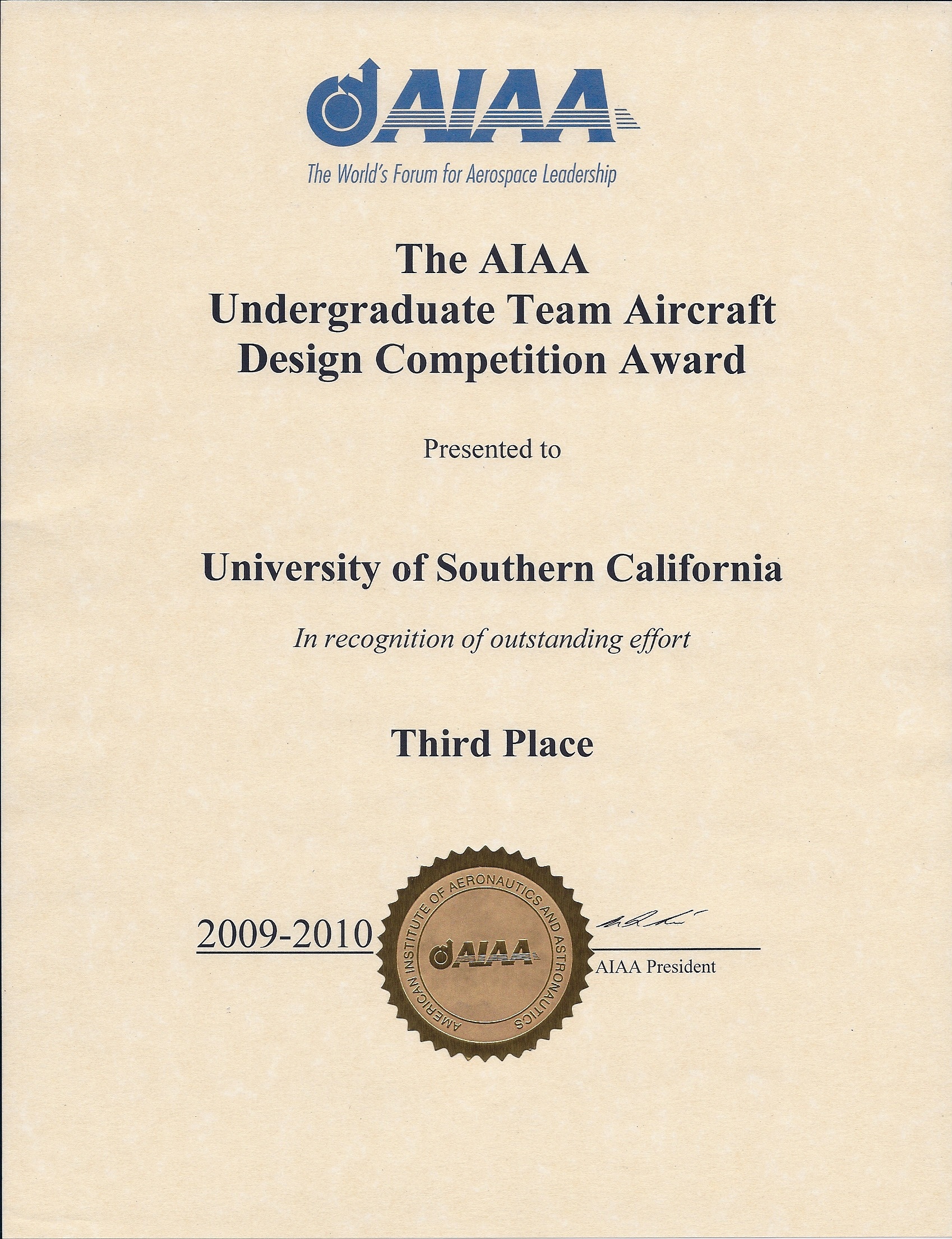 intense international competition within the aerospace industry and will require the use of revolutionary concepts in the fields of aerodynamics, propulsion, structures, systems, and alternative fuels to satisfy the demands of the airline community.

UACC entered five designs into the competition. Each entry consisted of a 100-page proposal accompanied by over a dozen large scale drawings, detailing the process of design and justifying the engineering decisions made to satisfy the requirements issued by AIAA.

The results of the competition were announced in early September indicating that the Egret entry has won third place among the 50+ aircraft design entries submitted to the competition. Members of the USC Viterbi team were invited to publish and present a paper at the 10th Annual AIAA Aviation Technology, Integration, and Operations Conference in Fort Worth, Texas, which was very well received by the organizers as well as a renowned panel of participants in the field of aircraft design.

As a result of the advanced technologies utilized in its design, Egret gained a 30% reduction in fuel burn, and depending on future fuel prices, a 40-50% reduction in direct operating costs compared to present day conventional airliners.

Enabling these impressive performance improvements were utilization of a series of novel concepts that push the boundaries of aviation technology. These concepts have required completely new approaches to the methods of design and manufacturing for commercial aircraft.

For example, the composite fuselage is not electrically conductive, unlike traditional aluminum airframes, requiring the embedding of copper meshes in the aircraft’s carbon-fiber skin to protect against lightning strikes.

To lower Egret's air resistance, the quality of the aircraft’s skin had to be dramatically improved by building the aircraft up from fewer, larger exterior panels which will minimize the tiny gaps and misalignments between skin panels in a traditional jetliner. Additionally the wings' moving surfaces must be re-engineered to reduce the interference with the laminar airflow.

The lower air resistance of Egret means that its engines do not have to push as hard, and as a result, it burns much less fuel. Because of this, Egret can fly with less fuel onboard, allowing it to carry more cargo and passengers instead. This leads to lower operating costs, and increased profits for the airlines.

A very novel type of engine was specifically designed for the family of aircraft designed by UACC. As information regarding the performance of the open-fan and geared turbofan engines (utilized by all of UACC’s concepts) is not available in public domain, the team undertook the complicated task of designing the engines to power their designs. This allowed them to identify challenges in areas such as engine-airframe integration and aero acoustics and address them with sufficient details to achieve a fully integrated design which would comply with Federal and industry regulations regarding the operation of commercial jetliners.

The team issued a statement:  "Having finished their nine month endeavor, the UACC team members would like to express their gratitude for the tremendous support of their faculty mentors: Professors Ron Blackwelder, Oussama Safadi, Larry Redekopp, Blaine Rawdon, and Mark Page. In addition, the assistance provided by Marc Aubertine from USC's writing program and the members of the USC AeroDesign team was essentail in the planning and writing the proposal documents. Among many others, UACC would like to thank Dr. David Glasgow at the USC's office of undergraduate research and the Los Angeles branch of the AIAA's professional chapter chaired by Dean Davis for providing the essential funding for this research project to proceed. Last but not least the UACC team thanks USC's commitment to educational and professional excellence and they look forward to being a representative of the Trojan family."