One of the USC Viterbi School of Engineering’s most distinguished faculty members spent his 75th birthday in Beijing being feted by the Chinese Academy of Sciences at an event that underlined USC Viterbi's growing globalization.

The “Symposium In Honor of Prof. Barry W. Boehm” brought distinguished experts and scholars from seven countries to pay tribute to the founder of the USC Center for Systems and Software Engineering (CSSE). The list included Shang-Hua Teng, chair of the USC Viterbi School's Department of Computer Science, where Boehm is the TRW Professor of Software Engineering.

"I was greatly honored to be invited to this special event,” Teng said. "Listening to talk after talk where these distinguished scholars acknowledged Barry’s profound influence to their own work, I was so proud to be his colleague and so happy that we have such a pioneering scientist in our department.”

Professor Mingshu Li, director of the Institute of Software at the Chinese Academy of Sciences (ISCAS), chaired the event and read the official announcement of the Academic Degrees Committee of the State Council formally awarding an honorary doctorate degree to Boehm.

The relationship between Boehm and Li and their respective institutions has remained strong since the two organized a 2005 Software Process Workshop in Beijing. In 2006, they signed a memorandum of understanding creating a joint laboratory for software engineering research.

So did National Academy of Engineering member and Northrop Grumman Senior Vice President for Engineering Neil G. Siegel, who under Boehm recently earned his doctoral degree while continuing his executive duties. Two USC research faculty members from CSSE, Jo Anne Lane and Ray Madachy (now an associate professor at the Naval Postgraduate School), served with Siegel on the event’s technical committee along with former Boehm student Ye Yang, who is now an associate professor and deputy director of the Laboratory for Internet Software Technologies at ISCAS.

A former Boehm student who could not attend, M.I.T. research associate Ricardo Valerdi, now an associate professor at the University of Arizona,  posted a YouTube video paying tribute to his teacher and wishing him happy birthday.

“He is a member of the National Academy of Engineering, an ACM Fellow, an AIAA Fellow, an INCOSE Fellow, and an IEEE Fellow. From 1989 to 1992 he served within the U.S. Department of Defense as director of the DARPA Information Science and Technology Office, and as director of the DDR&E Software and Computer Technology Office. His contributions to the field include the Constructive Cost Model (COCOMO), the Spiral Model of the software process, the Theory W (win-win) approach to software management and requirements determination. One proceedings paper said Professor Boehm’s contributions included authoring 412 publications with 8,068 citations, supervising 32 doctorate graduates, and teaching 3,801 graduate students in his software economics and software engineering project courses.

As symposium program chair, Osterweil said in his introduction to proceedings: “I would like to thank our friend, colleague and leader Barry W. Boehm for his tireless work and amazing contributions to the formation, nurturing and maturation of our community.” 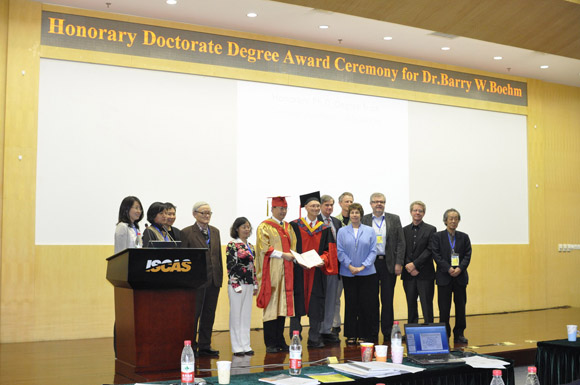