For the visually impaired, navigating city streets or neighborhoods has constant challenges. And the reality is that a significant number of such people still must rely on a very rudimentary technology—a simple cane—to help them make their way through a world flled with obstacles.

A group of USC Viterbi School of Engineering researchers is working to change this by developing a robot vision-based mobility aid for the visually impaired. A design first shown a year ago is now being further developed. For the Viterbi team, the need is clear. According to the World Health Organization, 39 million people worldwide are totally blind and a much larger number, 284 million, are visually impaired. In the United States, according to the American Foundation for the Blind, 109,000 visually impaired people use long white canes to get around. Guide dogs? About 7,000 nationwide.

Medioni and his colleagues, including James Weiland, a Viterbi School associate professor of biomedical engineering who is also a professor of opthalmology at USC's Doheny Eye Institute, and Vivek Pradeep, a recent Viterbi Ph.D who is now at the Applied Sciences Group of Microsoft, have developed software that “sees” the world and linked it to a system that provides tactile messages to alert users about objects in their paths. Pradeep won the 2010 USC Department of Biomedical Engineering Grodins Graduate Research Award and a USC Stevens Institute "most inventive" award for his contributions to the project.

The system uses Simultaneous Localization and Mapping (SLAM) software to build three-dimensional maps of the environment and identify a safe path through obstacles. The route information is conveyed to the user through a guide vest that includes four micro motors located on an individual’s shoulder and waist that vibrate like cell phones.

For example, a vibration on the left shoulder indicates a higher object to the left, such as a low-hanging branch, and the individual can in turn use that information to take a new path. Medioni said that canes have clear limitations with larger objects, from walls 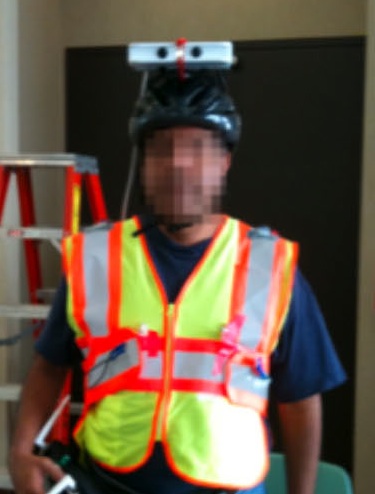 to concrete structures, and the technology will enable users to avoid falls and injuries.

The USC team tested the system on blind subjects at the Braille Institute. The users there “like the system, and they feel it really helps them,” Medioni said.

"We greatly appreciate the cooperation and help of the Institute and the test subjects," added Weiland.

Medioni is pleased with the prototype of the system presented at the 2010 International IEEE Engineering in Medicine and Biology Society (EMBS) Conference,  and more recently, May 1 at the 2011 meeting of Association for Research in Vision and Opthalmology. But he and the team are now working to improve it. The current head-mounted camera is bulky, and the team is now working on a micro-camera system that could be attached to glasses. The goal is to have a new system in place by the end of 2011, Medioni said.

The National Science Foundation and the U.S. Army funded the research, which will be used to help veterans who have been blinded during their service in the military, along with the W.M. Keck Foundation