Internet Addresses: An Uneven Shortage but an Inevitable One

As Internet authorities announced that they have handed over all of the available addresses, a research group based at the USC Viterbi School of Engineering Information Sciences Institute and headed by John Heidemann released its latest Internet census results.

There is some good news, according to computer scientist John Heidemann, who heads the team that has just released its results in the form of a detailed outline including a 10-minute video and an interactive web browser that allows users to explore the nooks and crannies of Internet space themselves.

Heidemann, who is a senior project leader at ISI and a research associate professor in the Viterbi School's Department of Computer Science, says his group has found that while some of the already allocated address blocks (units of Internet real estate, ranging from 256 to more than 16 million addresses) are heavily used, while many are still sparsely used.  “Even allowing for undercount,” the group finds, “probably only 14 percent of addresses are visible on the public Internet.”

Nevertheless, “as full allocation happens, there will be pressure to improve utilization and eventually trade underutilized areas,” the video shows. These strategies have limits, the report notes. Better utilization, trading, and other strategies can recover “twice or four times current utilization. But requests for address double every year, so trading will only help for two years. Four billion addresses are just not enough for 7 billion people.”

The IPv6 protocol allows many, many more addresses  but may involve transition costs.

Heidemann's group report came as the Internet Corporation for Assigned Names and Number (ICANN) and the Number Resource Organization (NRO) made a Feb. 3 annoucement saying they have given out all the addresses, passing on most to regional authorities. 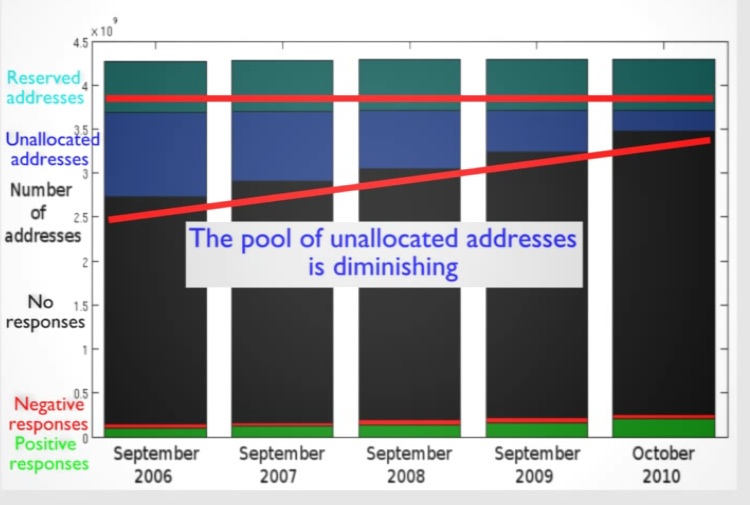 The ISI video offers a thorough background in the hows and whys of the current IPv4 Internet address system, in which each address is a number between zero and 2 to the 32nd power (4,294,967,295), usually written in "dotted-decimal notation" as four base-10 numbers separated by periods.

Heidemann, working with collaborator Yuri Pradkin and ISI colleagues, produced their first Internet census in 2007, following on earlier ISI work; it was the first complete census since 1982. To do this, they sent a message (‘ping’) each to each possible Internet address. (The video also explains the pinging process.)

At the time, some 2.8 million of the 4.3 million possible addresses had been allocated; today more than 3.5 million are allocated. The current effort, funded by Department of Homeland Security Science and Technology Directorate and the NSF, was carried out by Aniruddh Rao and Xue Cui of ISI, along with Heidemann. Peer-reviewed analysis of their approach appeared in ACM Internet Measurements Conference, 2008.