Engineering has changed a lot since John Slaughter was a child tinkering with electrical parts in Topeka, Kansas. "In those days people who were black or brown didn’t think about being engineers,"  he told 36 incoming Viterbi School freshmen, "and counselors didn’t encourage you.”

Listening were the 2011 participants in the 21-year-old Summer Institute offered by the School’s 30-year-old Center for Engineering Diversity (CED). The Institute is an intensive 3-week preview and preparation for engineering education, focusing on the specific needs of underrepresented minorities, according to CED Director Traci Thomas Navarro, who welcomed the audience.

CED Assistant Director Kevin Henry then introduced Slaughter, detailing his remarkable career. The highlights include 15 years in the Navy as a working electrical engineer, utimately becoming director of its Information Systems Technology Department and his subsequent appointment in 1980 as director of the National Science Foundation followed by terms as chancellor of the University of Maryland and president of Occidental College.

Slaughter, who now holds joint appointments in the Viterbi School of Engineering and the Rossier School of Education, gave a detailed and often humorous account of the beginning of the path that brought him to USC.

After thinking of veterinary medicine, Slaughter said,  he chose electrical engineering (EE)  instead after an unpleasant encounter with animal innards.

Entering high school, he told his counselor about his lofty ambition. Before he knew it, “I was in trade school learning to repair radios.”

He learned well – with help from his parents he set up a shop in his backyard where he offered to repair “any radio in Topeka for $4 plus parts.” But when he graduated, he went to an open house where representatives of the University of Kansas and Kansas State met with prospective students. He learned that the trade school curriculum had not given him any of the prerequisite courses he needed to study engineering. “That was the first time I learned that I had been misdirected,” he said.

But he persevered. “I went to a small liberal arts college, got a scholarship and took the math and science classes I should have taken in high school.” And a silver lining appeared. He was also excited by the courses he took in liberal arts: “It was the best thing that could have happened to me,” he said. After two years, he was off to Kansas State, then to UCLA. 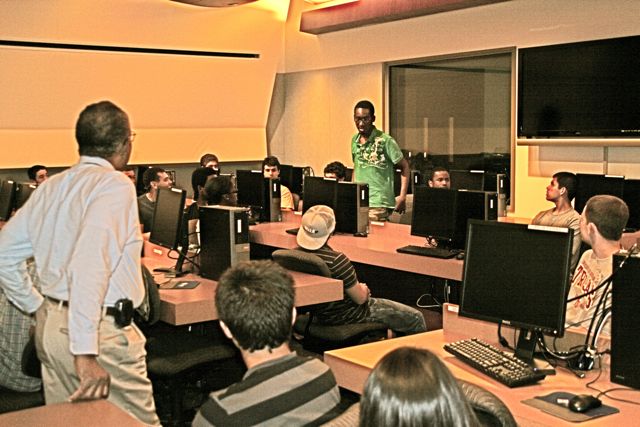 Slaughter concluded by talking about the vast vistas opening for engineers in biomedicine and repairing the environment, cities, transportation, water and just about everything else and offered advice.

“Don’t be so narrowly focused that you don’t appreciate the arts and humanities. Don’t be so tied down with Facebook that you don’t get out and talk face to face. Get away from the machine. I wish you all the best. Good luck!"

The institute students then got up, one by one, and said where they were from and what was their major. Slaughter joked that his specialty, EE, was chosen by only two, compared to eight in computer science, eight in aerospace/mechanical and nine in biomedical.

In her remarks to the students, 10 African-Americans, 24 Latinos and two Native Americans; nine men, four women, Thomas Navarro emphasized how the CED program would help them.

“You will leave with a plan about how to be successful at USC,” she said. “You’ve been successful, you’re leaders, you’ve got it. We’re introducing you to a different level. You can do the work. We’re here to remind you of that."

The CED according to its mission statement tries to build “a supportive environment that prepares students academically, professionally and personally for success as professional and academic engineers. Our goal is to foster a community of scholars focused on professional excellence.”