The much anticipated Maseeh Entrepreneurship Prize Contest (MEPC) kickoff event took place on Thursday, January 13th in the Ming Hsieh Conference room on the USC Campus to announce the selected teams vying for the impressive $50,000 prize.

The announcement for the prize was made in October, 2010, when Fariborz Maseeh, a member of the USC Viterbi School Board of Councilors, donated a $1 million endowment through the Massiah Foundation to create the annual prize. Around 75 guests, 29 students and 15 mentors attended.  Many prominent faculty and Viterbi executives were on hand to compliment the selected teams.

The event included welcome remarks from Dean Yannis Yortsos with an introduction of Maseeh, followed by Peter Bereel, MEPC director and an associate professor in the Ming Hsieh Electrical Engineering Department. Bereel, who is also faculty director of Innovation and Entrepreneurship, introduced the “Class” of selected students for the 2011 Contest. Bryce Benjamin of the Lloyd Grief Center, who is MEPC Organizer, introduced mentors. Bereel detailed the competition mechanics followed by a Q&A.

improve society overall as they work to meet important needs, for example as those identified in the Grand Challenges,” said Yortsos. “Each team has four educational sessions that will perform market analysis, feasibility, financials and the pitch for their projects – that is led by an investor/business leader or entrepreneur.

The 15 teams selected spanned 8 of the 14 Grand Challenges. The themes of the projects were focused around the National  Academy of Engineering’s ‘Grand Challenges’.

The student submissions and caliber of project concepts were extremely competitive.  Some of the students had prior projects that had already secured funding through outside parties, making the quality of the student pool stronger and more exclusive. This was the case with the team from Triptrotting, Inc. which had already received funding from Idealab. This, however, ruled them out of the MEPC Competition.

Fairborz Maseeh attended the event and was impressed with the amount of enthusiasm that the contest had garnered. His message to the group was sincere and poignant as he told his story about growing up in an environment that lacked entrepreneurial opportunities.   He said that he wished that he had had a program and contest such as this when he was a young entrepreneur.

The event marked the MEPC lectures stage of the competition, which consists of four MEPC lectures with prominent leaders, innovators and entrepreneurs asses 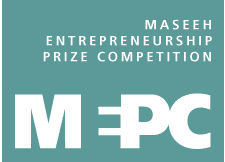 sing the business plans, financials, and risk models for the projects.  The next stage will be the practice presentations in late March. The MEPC Program is run by the Viterbi School of Engineering with support and collaboration from the USC Stevens Institute for Innovation and the Lloyd Grief Center for Entrepreneurial Studies. The MEPC Finals where semi-finalists will compete for the $50,000 Grand Prize, is set for April 15th, 2011.

For more information on the MEPC Program, please visit http://maseeh.usc.edu/