Viterbi E-Week Proves to be a Rousing Success

If you were hanging around the Viterbi E-Quad last Tuesday, you might have seen professors staggering about, wiping whipped cream and pie crust off their faces. It was, of course, the start of E-Week.

As universities and other institutions across the country celebrated National E-Week as a week to commemorate engineers and their work, the Viterbi School packed four days full of exciting activities and events.

E-Week got off to a rollicking start with the Kick Off Carnival in the E-Quad. Student organizations set up carnival games, which included the aforementioned IEEE Professor Pie Toss, Tau Beta Pi's "bent" bean bag toss, the AIChE Quantum Dots Color Memory Game, as well as many others. Some lucky students played “Pin the Smooch on the Engineer”, set up by USC’s Society of Women Engineers.

On Wednesday, several teams battled it out in the NSBE Quiz Bowl, testing their knowledge of engineering and pop culture. Thursday saw even more eclectic events, as the KIUEL Showcase transformed the Viterbi Museum into an art gallery, displaying the incredible paintings, sculptures, photography, music and other creative projects done by Viterbi undergraduate engineering students. Later that evening, was the much-awaited Viterbi Talent Show & 7th Annual Engineering Date Auction, featuring performances by the USC Merry Men, the band Time Dilation and several talented students including John Harrison and Ilene Rafii, Keith Henkel, Nimal Patel and Matthew Burke. In between acts, several lovely ladies and dashing gentlemen were auctioned as dates for the Viterbi Ball. All proceeds from the auction were donated to the Make-a-Wish Foundation.

Engineers gave back to the community on Friday, when students volunteered at “Discover-E”. Viterbi student organizations hosted 200 students from local middle schools who spent the day participating in engaging engineering activities such as Tallest Tower, Strawberry DNA, Egg Drop, and Ice Cream Making.

The culmination of the E-Week and the most hotly anticipated event for the student body was the Viterbi Ball. This year, it was held at the Warehouse in Marina Del Ray. Over 300 students attended the ball, which was highlighted by the crowning of the Viterbi King and Queen- Evan Lee and Lisa Verzemnieks.

Yakshita Desai, a senior in biomedical engineering and a member of the Viterbi Student Council said she thoroughly enjoyed her role in helping the Viterbi Student Council organize E-Week. "E-Week this year was such a success because of the incredible student turn-out to all the activities. My favorite part of the week was definitely Discover-E. It was so great to see the neighborhood kids get inspired and excited about the possibilities in engineering."

National Engineers Week is celebrated every February, during the week of George Washington’s birthday, to spotlight the engineering profession and give student engineers a chance to network with their peers, faculty, engineering professionals and the community. The event was launched in 1951 by the National Society of Professional Engineers, and each year it reaches thousands of schools, businesses and community groups across the United States.

According to the National Engineers Week website, Washington's birthday week was selected because George Washington had an engineering background. The first U.S. president had worked as a land surveyor in his youth and was the first person of any stature to propose forming an engineering school, which led to the founding of the U.S. Military Academy at West Point.

USC’s engineering school has been celebrating the event for almost as long. Photos going back to the 1950s show the crowning of the E-Week queen and unshaven young men participating in the Beard Growing Contest. They had one week to see how much hair they could grow. This year included a special emphasis on women in Engineering, and ‘Introduce a Girl to Engineering Day’ was celebrated on Thursday.

President Barack Obama issued an official statement on E-Week reflecting thoughts from his State of the Union address: “In order for America to win the future, we need to out-innovate, out-educate, and out-build the rest of the world…Initiatives like National Engineers Week can spark a sense of wonder and excitement in these fields for our country’s young people.” 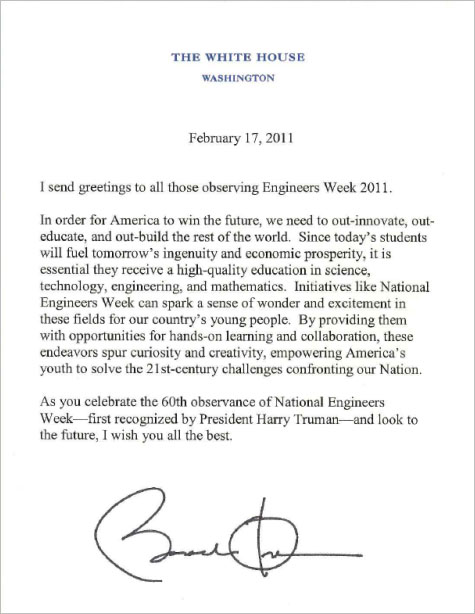 The National Engineers Week Foundation said “engineers use their imagination and analytical skills to invent, design, and build things that matter. They are team players with independent minds who turn ideas into reality. By dreaming up creative and practical solutions, engineers are changing the world all the time.”