Although diet and lifestyle changes can often reverse atherosclerosis in its earliest stages, no real-time means of detecting pre-atherosclerotic 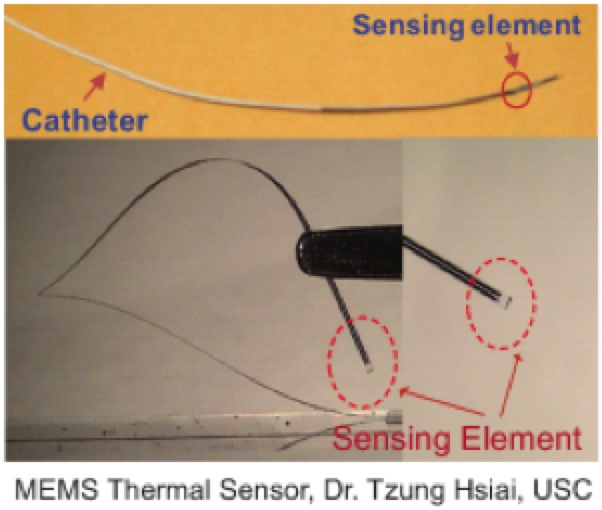 regions exists. The MEMS sensor method has the advantage of being both minimally invasive and sensitive. The technology has the potential for widespread and rapid application during diagnostic angiograms.

The study’s lead author, Tzung Hsiai, MD, an associate professor of biomedical engineering and cardiology at the University of Southern California, says, “the innovation of this study lies in the convective heat transfer strategy to detect changes in output voltage signals in the non-obstructive, albeit inflammatory and otherwise considered normal arterial regions.”

Scientists have demonstrated that frictional force acting on the walls of vessels by blood flow, known as shear stress, is intimately involved in oxidative stress and inflammatory responses that lead to atherosclerosis. In athero-prone regions, the flow is disturbed, yet detection of changing flow patterns in real-time remains a challenge.

Hsiai’s group developed a micro-electro-mechanical system (MEMS) by depositing titanium and platinum on a flexible polymer membrane and patterning them to form the sensing elements. They deployed the sensor via an angiogram catheter into the aortic and abdominal arteries of rabbits that had eaten a high fat, high cholesterol diet, and a control group that had eaten a normal diet.

An electric current passed through the sensing element and generated a thermal layer in the flow field, from which convective heat transfer was measured as a function of the voltage signals. In the regions of atherosclerotic lesions, blood flow is disturbed. This causes changes in convective heat transfer from the sensing element to the flow field, and thus, changes in voltage signals. The sensor measured a high voltage upstream from the part of the blood vessel that harbored the atherosclerotic plaque, and a low voltage downstream.

The scientists concluded that the MEMS thermal sensor method could sensitively detect pre-atherosclerotic regions that otherwise showed no clinical signs of atherosclerosis. The authors integrated mathematical simulations, fluoroscopic images, and dissection of the aortas to verify their results.

Once the MEMS thermal sensors have identified the atherosclerotic lesion, doctors can identify whether this lesion is a vulnerable or stable plaque. A vulnerable plaque could rupture, potentially blocking arteries and causing heart attacks and strokes. Doctors perform angioplasty and implant stents to prevent blockage of vessels. However, lifestyle changes and medication can manage stable plaque.

Hsiai says, “despite imaging modalities, we have yet to develop a means to differentiate vulnerable from stable plaque. If we can differentiate vulnerable from stable plaque during a diagnostic angiogram, we can avoid unnecessary complications from angioplasty and stenting, and deliver an enhanced risk-to-benefit profile for our patients. It could also reduce health costs by eliminating unnecessary procedures and for treating procedure-related complications.”

About the Annals of Biomedical Engineering