The University of Space Combustion 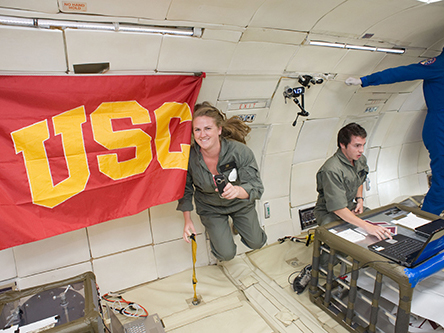 Throughout June 8–15, five USC Viterbi undergraduate students floated and spun throughout the halls of NASA’s Microgravity University at the Johnson Space Center’s Ellington Field in Houston, Texas. Enter: the University of Space Combustion. The team—Molly Martens (ASTE ’12), Alec Leverette (AE ’13), Colin Wylie (AE ’12), Morgan Bowser (BMEC ‘12) and Vlad Podolsky (ASTE ’13)— conducted their experiment “The Effect of Radiative Properties of Gases on Combustion Behavior in a Microgravity Environment” on a retrofit Boeing 727-200 named the “Weightless Wonder,” informally and—if not fondly—jestingly referred to as the “Vomit Comet,” based on its effect on those with a keen sense of stomach awareness. The highly choreographed 45-degree parabola flight patterns result in 20-25 seconds of weightlessness.

Nationwide, over 60 proposals were submitted to the rigorous 2012 NASA Reduced Gravity Education Program, of which the USC team was selected as one of 14. Upon acceptance of their research proposal (including a K-12 outreach component), team members then proceeded with medical exams, built the physical project, completed K-12 outreach, underwent physiological training, boarded the ultimate bounce house to conduct their experiment, and lastly, but surely not least, are currently writing their final report. This year’s research cohort includes teams from the Massachusetts Institute of Technology, Purdue University, University of Washington, Virginia Polytechnic University, and Yale University. 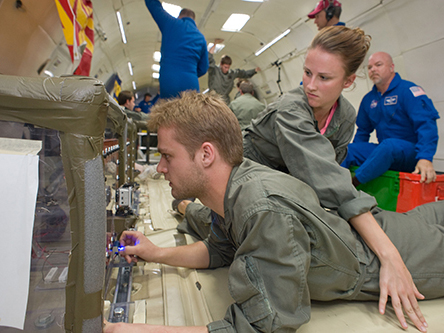 The team’s project was largely inspired by the research of Professor Paul D. Ronney, USC Professor of Aerospace and Mechanical Engineering, whose early encounter with “flame balls” at NASA in 1984 spurred his research on combustion in low-gravity conditions. Ronney reviewed the team’s proposal drafts, attended several of their meetings, helped hone research concepts and monitored the team’s progress, but he stresses that this was a remarkably autonomous team. “[The team has] done a great job of being very proactive. I gave them advice on the scientific component, but they ran the whole show. They were a very well led, very well organized, and a very competent team. Everybody was really enthusiastic, participated and contributed a lot.” The USC team was also one of the smallest teams in the program, itself a massive undertaking even for the largest of teams, but Leverette emphasized that the experience was ultimately “rewarding because [the team] got to be so involved in all aspects of it” and that they “all learned a great deal about working in that kind of environment.”

Initially, Ronney suggested building the experiment around liquid fuel droplets, but due to their “finicky and squirrely” nature in low-gravity, he and the team went on to develop wax molds, which Podolsky affectionately refers to as one of his most memorable moments: “Seeing the wax balls burn successfully for the first time and seeing the flame in 0G, 1G, and 2G as the balls burned—this was especially personal for me, as I had to mold each ball individually, which took forever to make.” Each wax ball was housed in three different enclosures, each filled with different gas mixtures: oxygen & carbon dioxide, oxygen & nitrogen, and oxygen & helium. Essentially, the flames burn in a spherical shape—hence “flame balls”—as opposed to the normal teardrop shape, which results from the absence of buoyancy-induced flow of the light combustion products at microgravity. The team is currently analyzing the combustion data from all three gaseous conditions. 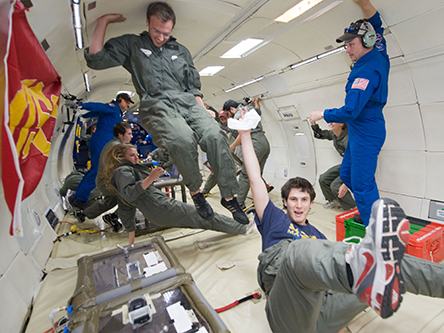 Podolsky remarked, “I learned about the influence of gravity on a flame's shape which is something I didn't know prior to starting the experiment. The overall experience reaffirmed to me, in regards to research, that the last 10% of a project always takes the longest time. You have to be patient with this and steadily work till the end.” On the actual experience of low-gravity conditions, Podolsky likens it to a hybrid of several terrestrial sensations: “Combine the feelings you get from riding on a roller coaster, skydiving, and floating in water.” Leverette humorously adds, “You had to come up with clever ways to keep yourself oriented in a way that you could work on the experiment. If you started to drift away, there was no graceful way to make your way back.”

Naturally, many team members envision a career in the space industry, including Leverette and Podolsky, both of which have interned at SpaceX. Leverette resolutely states, “I plan on putting my engineering degree to use working and contributing in a creative capacity to the development of manned spaceflight capability. I cannot see myself working in any field which does not directly or indirectly relate to space exploration.” Beyond the opportunity to work in a professional capacity with NASA, this program provided indispensible lessons for use within and outside of space, including an impactful experience working with K-12 students.

Bowser, who largely oversaw the K-12 component, explains, “We got to introduce younger students in the USC community to some neat opportunities available to them. Our ultimate goal was to inspire them to pursue STEM fields in their education and careers.” The team shared insight on how each member came to select engineering majors, how they came to be involved with the project, the basic theory behind the actual project, as well as leading group design experiments, demonstrations, and games. The team worked with schools within the USC Family of Schools, Iridescent Learning Center, and the USC Math, Engineering and Science Achievement (USC MESA) after school learning program. 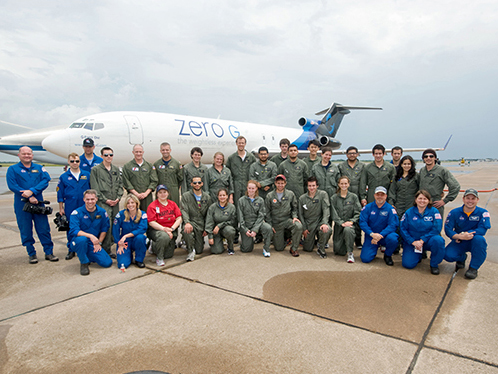 Moreover, the team also advised their K-12 pupils about other NASA outreach programs, including the “What if No Gravity?” (WING) and Dropping in a Microgravity Environment (DIME) programs, where students can design their own microgravity experiments to be tested in NASA's drop tower at the Glenn Research Center in Cleveland, OH. “It would be really cool to see some of [the K-12 students] apply for [the programs] and possibly continue their research into their college years to test their experiments through the Microgravity University program we were a part of,” said Bowser. Similarly, this is also somewhat of a personal legacy project for the USC team.

Team leader Martens is no stranger to the Microgravity University program: as a child, she regularly attended Smithsonian Space Camp in Hutchinson, KS, and later moved on to be a camp counselor for several years. This is where she first learned of the NASA program for college students. For Martens, this was a rewarding union of a childhood dream realized and a once in a lifetime learning opportunity: “The program was an incredible experience for all of us. While the flight itself was unlike anything any of us had ever experienced, the program also helped us become better engineers and taught us a lot about the entire research process, from project conception to the final report.” Ronney also reminisces about his own lifelong torch to ascend the Weightless Wonder: “When I was a graduate student, there were some people in my lab who were flying on the ‘Vomit Comet’ they were using at that time [the KC135]. As soon as I heard about that plane, I thought, ‘I’ll do anything to get on that plane!’ I did manage to get onto it, but it wasn’t until I was a faculty member back in my former life at Princeton. It took me ten years to get on that plane!”

All photos courtesy of NASA.