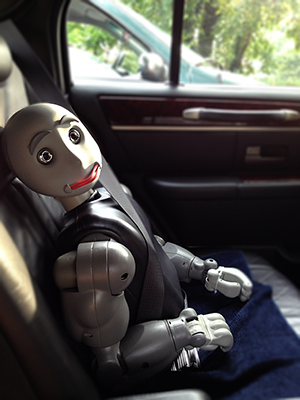 An elderly thief develops dementia and finds an unlikely friend (and partner in crime) in a robot. Meanwhile, another robot finds itself hanging out at Chili’s, strapping in for a flight across the country, as well as taking a spin in its own limo. One of these is the fictional premise of this year’s Sundance hit Robot & Frank. The other is the true story of Bandit — Maja Matarić’s socially assistive wünderbot — on its journey from the USC Interaction Lab to the 2012 World Science Festival in New York City.

While Bandit does not share the celluloid robot’s proclivity for felony, he does in fact derive his name from a “thief” of another kind. In an earlier experience with the media, an inquisitive photographer managed to detach one of Bandit’s arms, treating it much like a “one-armed bandit,” better known as the coin guzzling slot machine. But the moniker is not just a bit of an inside joke: it’s a cautionary reminder of just how sensitive the technology is. In fact, when first asked to attend the 2012 World Science Festival, Matarić’s team balked at the prospect of taking Bandit on a cross-country trip. Ross Mead, Ph.D (CS), remarked, “The first thought was, ‘This is going to be a lot of work — a real challenge — there are a myriad of things that could go wrong.’”

Travel went smoothly indeed, with Mead and Bandit becoming somewhat of a cinematic odd couple themselves. What was it like travelling with a talking, interactive robot? In a word, “Hilarious,” deadpans Mead, who learned that eating breakfast across the table from a robot in an airport is nothing short of a spectacle, one that would probably have a better shot at believability within the context of a film. 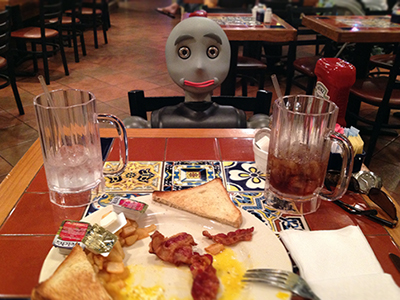 Upon arrival, Matarić demonstrated Bandit at “The Future of Computerized Companions” screening of Robot & Frank. Bandit was intentionally prepared to start with “robotic” responses — the expected — eventually leading to a more organic and nuanced demonstration of Bandit’s sophistication, capabilities, and humor. But what appeared to be a lighthearted and extemporaneous demo was actually the result of a month’s worth of preparation by Matarić’s team. Every logistical and technical detail — from acoustical resonance in the room to the fact that the robot would essentially be running for hours over the multiple events at the Festival— was taken into account, but chance still had the possibility of derailing anything and everything. “Many people know Asimov’s Three Laws of Robotics. But there is a fourth law: ‘Robots don’t work on demo day’,” quipped Mead. Fortunately, nothing went wrong.

Matarić also participated in the “Spotlight: Innovation from Unexpected Places” panel, which featured a broad spectrum of renowned scientists and engineers. What they all share is the uncanny experience of developing groundbreaking research with less conventional perceptions and methods. Along with recounting her own “Eureka!” moments and with commentary from Bandit, Matarić shared how USC came to coin the term “socially assistive robotics” and how the institution came to the forefront of this research. 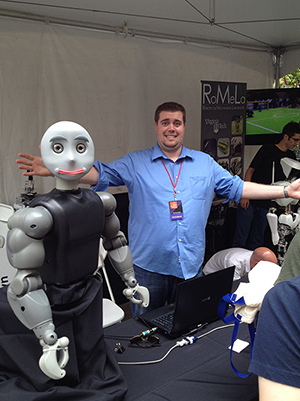 On short notice, Bandit also made a memorable appearance in the “Innovation Square,” a public, all-ages event at Polytechnic Institute of NYU. “Spontaneous” and “uncontrolled” are not exactly positive scenarios for a robot to find itself in, especially in the throes of the eleventh hour. “We basically went from a month of implementation [for Robot & Frank: The Future of Computerized Companions], to days of implementation [for the Spotlight panel], to hours [for Innovation Square],” said Mead. But it all went off without a hitch, with visitors bottlenecking at their tent with questions, curiosity, and awe. Dennis Hong (Virginia Tech) also demonstrated his walking robot at the neighboring booth, finding a synergistic partnership between both demos. “It was a perfect match up.”

The 2012 World Science Festival proved to be a wonderful forum for Bandit, with curiosities piqued and imaginations inspired. Beyond seeing Bandit interact with throngs of people in a public space, Mead recounts how it was a rewarding opportunity to demonstrate the importance of USC’s socially assistive robotics research: “People are so consumed with the fact that [Bandit’s] cool; it’s what draws them in. But we don’t just focus on cool things. We focus on things that are actually useful and have promise to help people in their daily lives. This is the really inspiring part; this is the hook.” The vast and growing elderly and special needs population is poised to benefit from robots like Bandit, whether it is social skills therapy, combatting loneliness (and subsequent depression), motor and speech skills rehabilitation, and so much more. Bandit is not a figment of science fiction: it’s a glimpse of a future of personal in-home robots that exist purely to improve the quality of life.