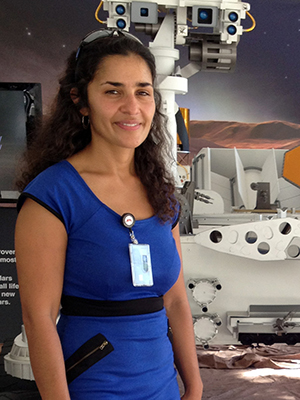 In the wake of Mars Science Laboratory’s (MSL) flawless landing of the Curiosity rover, NASA-JPL systems engineer and USC Viterbi School of Engineering alumna Anita Sengupta (AME MS ’00, AME Ph.D. ’05) has become a bit of a celebrity on the JPL campus.

Visitors, old and young, clamor to say hello and to congratulate her on this monumental feat. Sengupta is easy going, but she knows there’s no time to rest on her laurels—not for someone as fiercely ambitious and hungry for challenge as she is.

In the midst of this, she is currently assessing an impressive bevy of options: an International Space Station (ISS) fundamental physics experiment, a possible Europa orbiter mission or yet another Mars lander mission.

“When you come off a mission, you kind of figure out well, ‘What do I really want to do next?’ before you find your [next] home, so I’m trying to do all these different things. I think I’ll do the ISS one. It will be fun. It will be crazy. It’ll be really fast. But I think it’ll be good for me.”

Just two weeks ago, the world’s bated breath was held captive aboard the Curiosity rover. Would this hulking, jeep-sized rover be able to gracefully grand jeté through Mars’ tyrannical atmosphere and daintily plié onto its surface?

As proven by Sengupta, lead systems engineer of the famed parachute deployment phase of the planned entry, descent and landing (EDL, or the so called “7 Minutes of Terror” as described by Sengupta and her MSL cohort), absolutely. It just required the perfectly engineered bell skirt for this prima rover.

But the parachute design process was fraught with a myriad of factors. Specifically, the massive, heavy rover would require a 70-foot parachute deployed at speeds in excess of twice the speed of sound. The confounding bit was the inability to test said parachute on Earth in the same aerodynamic conditions of Mars, due to vast differences in atmospheric conditions.

This meant Sengupta and her team would potentially need to rely heavily, if not entirely, on prior parachute testing data of smaller parachutes and slower speeds. But with this comes several unknowns, and on Mars, you only have one parachute, so if it doesn't work, it is game over.

In the 1970’s, NASA conducted a series of supersonic parachute deceleration system testing: in excess of $100M (in today's dollars) NASA was able to purchase round trip tickets for parachutes to travel upwards to 150,000 feet into the Earth's atmosphere, then, with the aid of a rocket, blast them to supersonic speeds.

Granted, this sounds like Michael Bay’s science lab, but due to the differences between Earth and Mars, these conditions are as close as you can get to replicating the aerodynamic conditions of a Mars parachute.

Cut to 21st-century NASA and the age of refinement: imagine the budget as it was four decades ago; and that’s exactly the budget you won’t be getting. Sengupta proposed a cost efficient subscale test that involved constructing both the parachute and the vehicle at 4% scale and testing them within massive supersonic wind tunnels with cutting edge optical diagnostics.

After observing and measuring the aerodynamic phenomena and performance for this mini Curiosity, she and her team were able to translate this data to full-scale conditions and design a parachute strong enough to deploy at two times the speed of sound on Mars.

“That was the whole thing going into [MSL]: everyone was nervous saying, ‘We don’t understand what may happen with the largest supersonic chute at the highest Mach number of deployment on Mars ever attempted. We need to do this expensive [rocket] test,’ and if we had gone off and had to have done that expensive test, the project might’ve never gotten off the ground because we couldn’t afford to do it.” 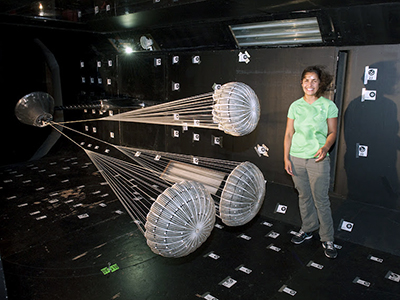 Sengupta jokes, “That’s what I do, I design and conduct subscale test programs to answer these questions from a fundamental physics perspective, at low cost compared to the full-scale testing option.”

A poster of the legendary motorcyclist Valentino Rossi graces Sengupta’s office space—she herself rides a Yamaha R6—and she reminisces about being a young child who not only liked dolls and stuffed animals, but also was enthralled by science fiction.

“I have always been a science fiction fanatic. I used to watch Star Trek with my dad and I was a huge Doctor Who fan.”

She beams, “The reason why I’ve done everything I’ve done is because I’m such a Doctor Who fan. Sci-fi just kind of gives you the idea that anything is possible, and there’s this massive universe out there. I always knew I was interested in space exploration from that sense of wonder.”

Sengupta is deeply committed to sparking the same sense of wonder that the time traveling, space faring Doctor Who saga kindled within her. On her youth outreach initiatives via NASA-JPL’s speakers’ bureau, she explains, “I hope we can use ourselves as vessels for encouraging other young people in the future. The next generation is the one that’s going to be doing the next thing — we must share our expertise with them.”

Meanwhile, Sengupta continues her own trek across the universe, in search of new stories and possibilities. It’s true what they say: science fiction is really just real science waiting to happen. The Doctor is in.