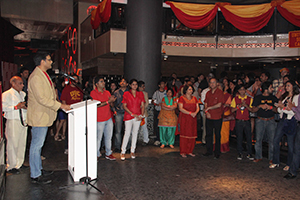 Enthusiastic Trojans in USC T-shirts flashed the "Fight On" sign as they sipped cocktails.  The sounds of the USC marching band washed over the crowd, fueling excited conversations among alumni newly reunited. You could be excused if you thought the festivities took place somewhere on the USC campus. Instead, they were held Dec. 2 thousands of miles away in Mumbai at the Comedy Store and Canvas in Lower Parel.

The event began with an hour of networking. After a short talk by Dr. Ranjit Nair, president of the USC Alumni Club in Mumbai , and a recorded message from USC Viterbi School Dean Yannis Yortsos, a group of comedians kept the audience in stitches.  Dinner and dancing followed. At the end of the night, every visitor received a USC T-shirt.. 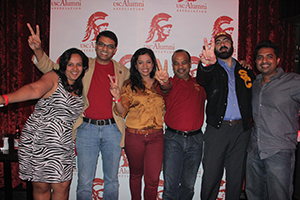 The USC network in India has grown over the past couple years primarily through events sponsored by the Viterbi School. This gathering marked the first time that local alumni threw such an event for themselves. The USC alumni network in India is off to a great start and is truly “Lifelong and Worldwide”. 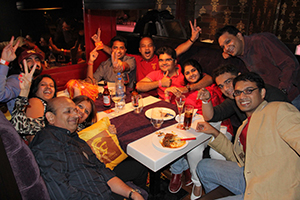