USC Trojans bested regional competitors such as Caltech, UCLA, UCSD and Harvey Mudd and will advance to the 37th Annual World Finals of the ACM International Collegiate Programming Contest, to be held July 2013 in St. Petersburg, Russia.

USC Viterbi School of Engineering Dean Yannis C. Yortsos remarked, "It is well known that Southern California universities have among the strongest computer programs in the US, thus the Trojans win is a strong statement to their abilities."

“It's a fantastic accomplishment on their parts,” remarked CS Professor David Kempe, ACM competition advisor and associate chair for undergraduate programs. Google, Electronic Arts, and VivanTech sponsored the USC teams, as well as the biannual USC Programming Contest. The contest is open across all majors to all students under the age of 23.

Because the actual competition allots five hours for problem solving, team USC Trojans structured its training schedule to mimic competition conditions and practiced roughly five to seven hours every two weeks. It paid off: the team completed nine problems out of a total possible of 10.

Cheng recalled, “The first two hours [of the competition] are intense. Two-and-a-half hours into it, we watched the [score] board after [solving] four problems: the top two teams had solved six already. We thought, ‘We’re better than this. We can do this!’ That’s when things changed.” Both USC Trojans' Cheng and Qiu were on the team that placed 34th, out of 112 teams, in the world finals last year.

With one computer per three-member team, the competition calls for a good dose of strategy, on top of the inherent mental crunch work. Though coding is often considered a “lone wolf” task, many members attribute their success to fostering good teamwork. 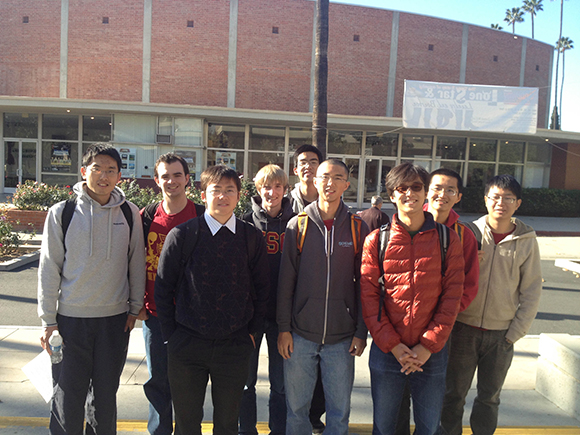 “To be honest, I didn’t really understand the value of teamwork until this year’s competition,” said Cardinal member and USC ACM board member Whang. “This is what I like about the contest, the fact that I get to cooperate with my teammates. The advantage of good teamwork was a lot greater than I had expected.”

Much of the undergraduate teams’ successes are attributed to Professor Kempe, USC Trojan member Cheng and alumni member Noel Overkamp, who trained the young students — many of which had never seen such rigorous problem sets outside of their traditional classroom settings.

Cheng stressed the fact that many of the upperclassmen and Ph.D. students were especially dedicated to training the freshmen contestants this year, who “[didn’t] have the knowledge yet, but [had] the potential.” Cheng recalled, “Last year, we just grouped all the freshmen together and prayed for the best.” This year, the undergraduate teams trained for three hours every two to three days a week.

This year’s competition was bittersweet for USC Trojans, as it was one of the last opportunities for all its members to compete, due to the age restriction. Cheng joked, “We call the ACM judges the ‘dark side,’ and they’ve asked both me and Rongqi [Qiu] if we want to cross over to the dark side in the future.”

But before humoring any talk of students becoming masters, there’s still the matter of their shot at international glory in St. Petersburg. Additionally, there is a strong likelihood that the USC Trojans team will participate in the North American super regional invitational, tentatively slated for Spring 2013 at the University of Chicago.

This competition is not mandatory , but as Cheng advises, “You can train all you want, but the best training is actually competing.”