Demo Day, now in its eighth year, is a highly anticipated biannual event that attracts the brightest programming and engineering students across campus, as well as the attention of video game industry leaders. Hosted by USC Games, a joint effort between the School of Cinematic Arts' Interactive Media Division and the Viterbi School’s Computer Science Department, the program has been ranked first in the nation by the Princeton Review for the past three years.

Standout debuts included the promising 3D stereoscopic system Holodeck, which is poised to shake up the video game industry with its virtual reality offerings. The Project Holodeck team also introduced Wild Skies, a virtual reality game that sends users soaring across the skies in airships straight out of Jules Verne’s imagination.

Scrapyard’s brawler/fighter also attracted much of the audience’s attention, including Mark Lamia, head of Treyarch Studios (Call of Duty: Black Ops II). Much of the lauded, polished appearance is attributed to a strong partnership with artists from Gnomon Workshop.

Nathan Perry (CECS, ’13), a user interface engineer, likens the game to Nintendo’s Super Smash Bros., a classic multiplayer game. “We really wanted to bring something together where four people would be there together [in the same room], playing the game. You can have a really fun experience with friends — really engaging in that way.”

The four-person melee is primarily driven by a wide array of customizations. “It allows a lot of customization, a lot more than other fighting games. You can really customize and make the character your own.” Currently, players can play as either a feline or bear in customizable mech gear; the team plans to add more characters during the next semester.

Another crowd favorite included the PC-based Core Overload, an impressive space shootout inspired by games like League of Legends, which feature 10-15 minute rounds of “capture the flag.” Core Overload also offers a heavy customization offering, from allowing the players to choose their spaceships’ wings, engines, chassis and miscellaneous assets, such as black holes.

The game was born out of a love of networks and multiplayer games that can be played on a large scale. The team’s approach to the project also lends itself to finding new friends and partners on just as large a scale: though some artists are local, many of the 3D rendering artists are from outside of the U.S., even as far away as Lithuania. For the artists who could not attend Demo Day, the team displayed an array of postcards featuring each artist’s work.

Demo Day also featured a notable lineup of iOS games, including Hedelby, an atmospheric experience with the tag line, “Hear your fear.” The group manages to deliver shivers with their use of holophonic and binaural sound engineering, which create a convincing, dimensional soundscape. Players navigate as a prisoner in Hedelby, a dark ward that sucks out the souls of their inmates. 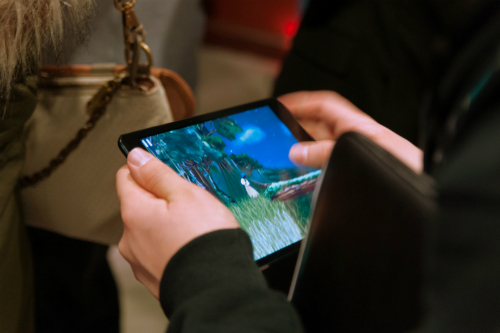 Thralled, built in Unity for iOS — and possibly for Android and Windows mobile systems in the future — takes a brave leap in portraying an escaped slave and her baby on the run in Brazil. Programmer Brenden Balcewicz (CSGM, ’13) explains, “It’s a very unconventional story for a game, which is one reason a lot of us wanted to work on it. It’s not something you necessarily have a chance to work on in [the] industry.”

While the team seeks to create an engaging and complex puzzle platformer, they are also dedicated to creating a pedagogical historical narrative about "one of the greatest calamities in history."  Inspired by the game’s designer and team leader Miguel Oliveira, who is originally from Portugal, the game seeks to shed light on the little known history of slavery outside of the U.S.

House of Cards challenges players and forces them to make hard decisions in what programmer Michael Borke (INEN, ’13) calls a “metaphor for the American Dream.” With decks of cards, players must build or raze homes. Whether building or destroying for personal gain, as a sign of benevolence or in a callous act to get ahead, players must confront — and pay the price — for climbing to the top.

All video game students will return next semester to complete their capstone projects, which will be formally presented at next spring’s Demo Day.