"These kids . . . will be our next astronauts, our next civil engineers, our next presidents of the United States." 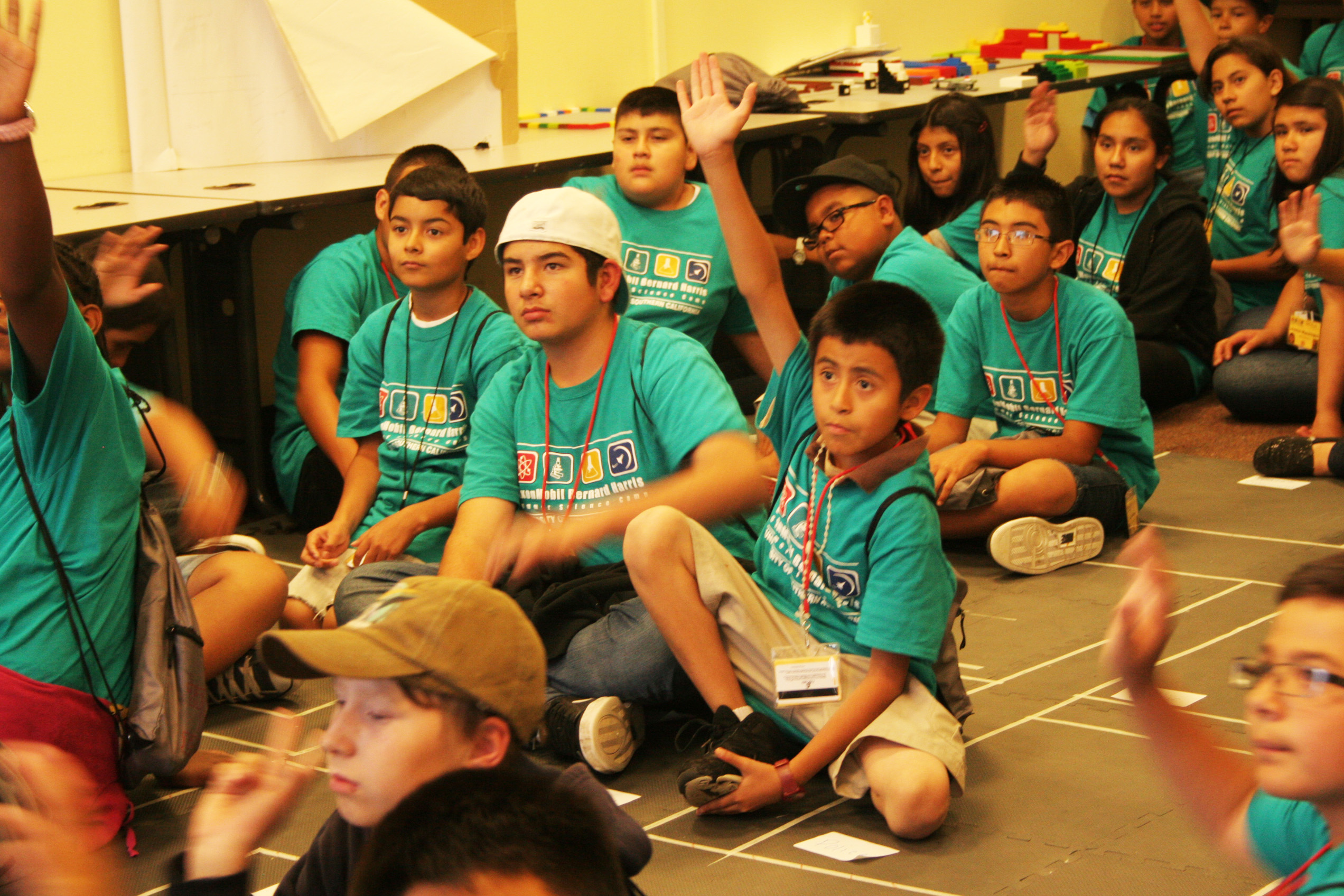 A group of 6th to 8th graders were sitting in a lecture hall on the USC campus, excited about traveling to space and going beyond the solar system. Eager to rush out and start, they first needed to fabricate a spacesuit material that could endure the strongest hit. The 48 students were divided into teams and given paper money to buy materials to build with. They had to make budgets, negotiate, compromise, measure and cooperate in order to win this contest.

Working engineers coached these children hand in hand at each table, explaining how it worked and answering their fanciful questions.

Parents and families crowded around to take photos. They might not understand space technology, but they certainly could discover the joy behind the serious faces of the kids.

“You are here, because you are special,” said Alex Holt, supervisor of the Safety & Environment Section at ExxonMobil.

All of these children were part of the ExxonMobil Bernard Harris Summer Science Camp (EMBHSSC) held July 9 through 20 on the USC campus and hosted for the second time by USC Viterbi. EMBHSSC is an academic and residential camp that aims to increase students’ math and science knowledge and skills while introducing them to college life and stimulating their interest in science and engineering as a potential career path.

Campers are selected from a pool of about 200 students from school sites that participate in the USC Pre College Programs, and members of traditionally underserved and underrepresented communities. Graduates complete a minimum of 52 hours of advanced science, technology, engineering and mathematics (STEM) study taught by instructors from area school districts and university faculty.

Louis Aguilera, 11, was one of the active campers. He was particularly drawn to environmental protection. The boy said his dream was to be a “green person.” He joined the camp because he wanted to help communities create better living environment by learning how to stop air pollution. In the camp, his favorite part was outdoor activities, but he found teamwork the most challenging.

“When one person messes up,” Aguilera said, “The whole team has to start again.”

He seemed comfortable working with others though. In his team project of building an airport in their “city,” He quickly finished making an airplane 20 minutes after starting it.

“Look, my airplane!” He said with a broad grin on his face and proudly showed it to everyone.

Urban planning is part of the entire curriculum that created based on the core of inspiring students, triggering their interests in science and engineering. According to the U.S. Labor Bureau statistics, the country will have more than 1.2 million jobs opening in STEM-related occupations in 2018, yet with a significant shortage of qualified college graduates to fill the gap.

Dr. Harald Holcomd, one of the camp instructors, admitted there was a lack of interest in science among American youths today. Throughout the classes, he had tried to overcome students’ fear of science by making it fun and enjoyable.

“To them, science is unknown,” Holcomd said, “Many of them don’t take science in elementary school…They see it on TV, but it’s misrepresented.”

Another instructor, Danielle Howard, said they built the curriculum for children to learn urban planning, physics and chemistry because Los Angeles was an urban area, and it connected to daily life. She described how these kids loved building bridges and the tight schedule to teach them all the knowledge and skills. She added that to make them interested in science, the key was to allow the kids to be creative, form their own ideas, and keep their hands on building things.

“Kids are responsive if they get to be creative,” Howard said, “They got to use their mind to come up with idea.”

Emma Serrano believed science would open more doors for her son’s future. She said he looked more excited since he joined the camp.

Twelve-year-old Jorge Campos also found the camp fascinating. With all the science experiments, he said he definitely became more interested in engineering, and his dream was to be a civil engineer or an astronaut.

“I learn and discover something new everyday,” Campos said.

The two-week long camp not only brought them closer to science, but also each other.

Francisco Majano celebrated his 13th birthday in the camp, and his mom brought a cake to class. The kids had a quick party during the break. Majano said he usually spent this birthday with family, but it felt like home with these campers.