USC Has Its 40th Olympian – a Ph.D. student in Engineering 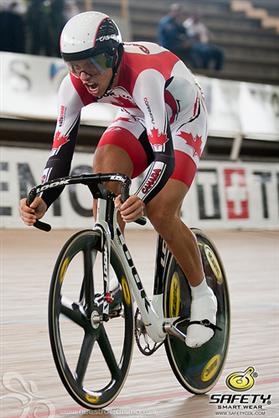 USC’s already remarkable roster of Olympians has increased by one, bringing the total number of Trojans competing in London to 40.

Cyclist Joseph Veloce (his name means “fast” in Italian), will be competing for his native Canada in the men’s keirin.  The keirin is a mass-start race in which riders trail a motorcycle that gradually increases in speed for several laps before pulling off the track. The riders then sprint for the remaining laps.

Veloce is an entering Ph.D. student in electrical engineering at the USC Viterbi School of Engineering. He is also a Provost/USC Viterbi Fellow. Veloce holds an engineering degree from McMaster University in Hamilton, Ontario.

His advisor is Keith Chugg, a professor of electrical engineering systems. Chugg, who also happens to be a road racing cyclist who competes as an amateur, said that Veloce’s academic specialization will be communications systems. “He’s a very disciplined guy who did very well academically basically learning out of a textbook,” Chugg said, explaining that Veloce missed many lectures as an undergraduate because he was training at the Home Depot Center Velodrome in Carson, Calif.

Diane Demetras, a student services advisor at USC Viterbi, alerted university officials to Veloce’s Olympic status, after realizing he wasn’t on a published list of Trojan athletes at the Games.

The keirin will be held on Aug. 7, and NBC plans to cover the second round and finals that morning and afternoon.

Veloce has both a blog and Twitter account, and has posted about his road to the Olympics on both. If Trojans want to follow him on Twitter, he is @jveloce13. His blog is at velocecyling.wordpress.com

This is Veloce’s first Olympics. He has competed at the World Cup and World Championship levels, and holds several Canadian Championship titles.