Viterbi Students Honored With Order of the Torch

USC Viterbi School of Engineering seniors, Elton Kwok and Paige Selby were initiated into USC’s Order of the Torch this semester. One of the highest honors possible for USC students, Order of the Torch provides lifelong membership each year to 12 of USC’s most accomplished rising seniors. Members of the Order are selected for their ability to excellently communicate the USC experience, strong public speaking skills and deep commitment to the people and institution of USC.

The first Viterbi students elected to Order of the Torch since 2007, Kwok is a Civil Engineering major with a minor in Business Administration from USC Marshall and Selby is an Industrial and Systems Engineering major. During their time with Order of the Torch, spanning the length of their senior year, they will serve as ambassadors for the USC undergraduate student body at athletic events. 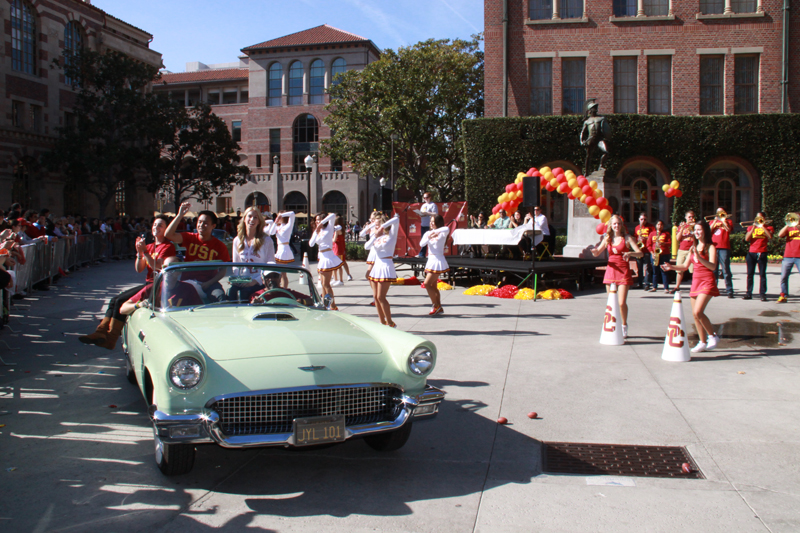 Many have already seen them, however, riding a vintage aqua Thunderbird down Trousdale during the Homecoming parade. Audiences at this year’s CONQUEST Rally also witnessed Elton Kwok, in front of thousands of students, receive the honor of being named “Mr. USC.” “I was very surprised to be selected as Mr. USC,” said Kwok.

Within USC Viterbi , Kwok has been a summer Orientation Advisor, a Student Assistant in Undergraduate Student Services, and Vice President of the Viterbi chapter of the Construction Management Association of America. He also studied abroad in Paris with the Viterbi Overseas Program and participated in a construction management competition in Reno, Calif. with the Associated General Contractors, leaving with an “Outstanding Student Award,” the first individual award ever given at the competition.

Within the Marshall School of Business, Kwok became a member of Los Angeles Community Impact, a student organization that does pro-bono consulting for the local community. On the USC Campus, Elton was Treasurer this year for Undergraduate Student Government, President last year of co-ed community service fraternity Alpha Phi Omega, and ambassador for Society 53, a student outreach program for the Alumni Association. A true embodiment of the traits of a USC Trojan, Kwok will begin work at Bank of America when he graduates, servings as a financial analyst in their Finance Management Associate Program.

When asked about the Order of the Torch, Selby says, “I am thrilled to be a part of the Order of the Torch. This is the highlight of my USC experience and I am looking forward to building new relationships with Order members and being involved in mentoring the up and coming leaders of USC.” 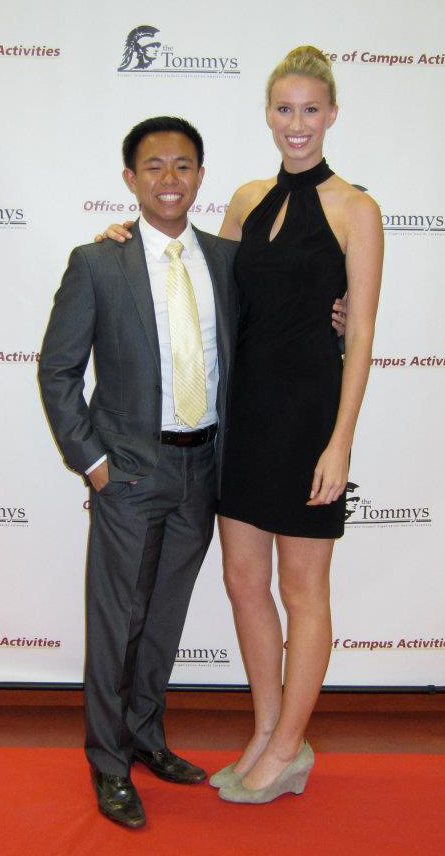 During Selby’s time at USC, she has been involved in various campus organizations. Within the Greek community, Selby is President Emeritus of Delta Gamma Sorority (DG), having lead a 233 member chapter. Recently she hosted USC Athletic Director Pat Haden as keynote speaker at DG's bi-annual Scholarship Dinner. Previously, as DG’s VP of Foundation, Selby coordinated and executed many events that served the LA Blind Children's Center and led DG to capture an award at the 2011 Greek Awards for "Excellence in Fund-Raising and Philanthropy Events". As member of DG's Honor Board, Paige received a Founder's Day award for her energy and commitment to DG. Selby has been involved in USC programs including JEP, Rho Lambda Honor Society, Institute of Industrial Engineering, Society of Women Engineering and Undergraduate Student Government. Off-campus, Selby mentors girls, encouraging them to pursue studies in the fields of science, technology, math and education (STEM). In fact, Selby recently helped raise $163,000 in just ten minutes at a STEM fundraiser. Her internship experiences include projects at Disneyland Hotels, Aerospace Corporation and Rolls Royce Jet Engines in Derby, England.

Heather Larabee, assistant dean of students and director of Campus Activities says, “One of the largest roles of the Order of the Torch is to serve as facilitators for the Emerging Leaders Program (ELP) retreat. In this capacity, the Torch members genuinely connect to a group of young Trojans and inspire these students to make the most of their USC experience. I love seeing the Torch members interact with the ELP students. It is one of my favorite things about the Order of the Torch.”

Together Kwok and Selby bring the Viterbi spark to the Order, helping to keep the light of the USC torch burning bright.