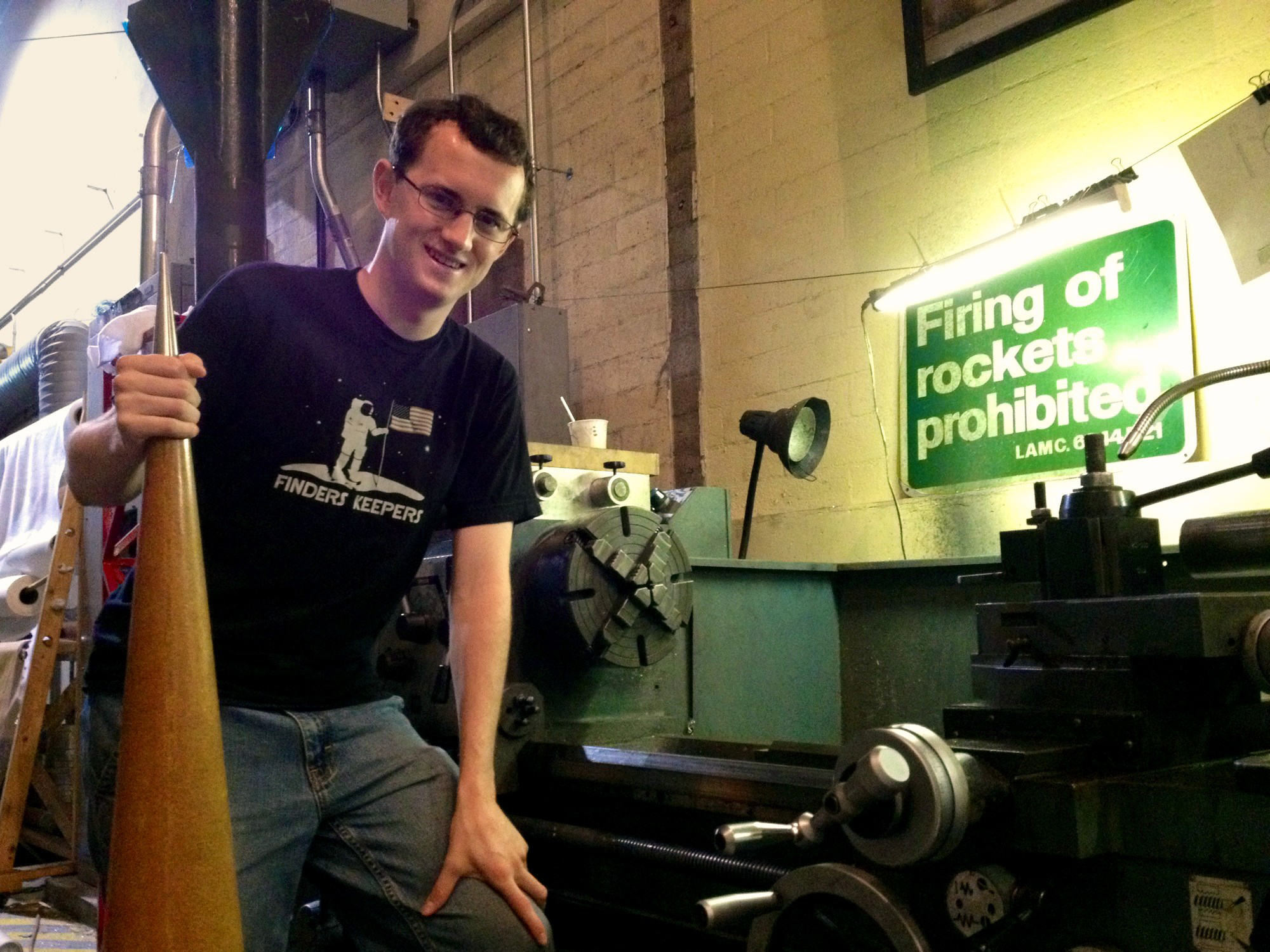 It’s nearly noon on a blistering hot Southern Californian day, and inside a chilly campus food court, Matthew Orr takes shelter: as he leans casually against a pillar, he thumbs through his phone and shakes a beading iced tea between sips. At first glance, USC’s sole recipient of the prestigious 2012 Barry M. Goldwater Scholarship looks like any other undergraduate enjoying his summer vacation. And for all intents and purposes, he is—he’s just doing it whilst juggling four different summer lab jobs.

Orr has made quite the name for himself in USC’s Rocket Propulsion Laboratory (USCRPL), which he has worked with since his freshman year. In the wake of a graduating cohort of leaders, Orr and classmate Jordan Noone have been tapped to man the helm, in what will be the fourth generation of leaders since the lab’s inception. The exterior of Rocket Lab looks innocuous—like any other smattering of brick and stucco on campus—but a flurry of numbers entered into the security keypad reveals a dimly lit facility evoking the haphazard, industrial ambiance of a hangar. Barring scale, that’s probably appropriate, since it really does house a spacecraft.

Disassembled from its nose cap, propellant and internal electronics, the carbon fiber rocket, named Traveller, currently only weighs a modest 40-50lbs. It rests quietly in a vertical red cage, but its presence roars with the ambition of crowning USC as the first university to send a rocket into space. Unassuming, yet capable, it seems only fitting that Orr is poised to make this a reality. In a veritable arms race full of drama, defeat, victory and the ominous ticking of a clock, Orr has every intention of zipping by the competition—at the speed of Mach6. It’s hard to recall that Orr is barely entering his junior year in undergraduate studies, but he himself is candidly aware of how fortunate he and the lab are. “[Traveller] is sort of what nations would have built in the 60’s for solid rockets, so it’s very advanced for undergraduates, and we’re very fortunate to have put so much effort into something like this. Getting hands on experience is what I have loved the most.”

Besides Rocket Lab, Orr also works closely with the USC Viterbi Collaborative High Altitude Flow Facility (CHAFF) and is currently constructing a mirror system that will be integrated into graduate student Matthew Gilpin’s High Energy Advanced Thermal Storage (HEATS) Project, which aims to melt boron at 2350 Kelvin—technology that could potentially provide a new way to power spacecraft. Every Wednesday, he mans the telescope on Professor Edward Rhode’s 60-foot solar tower on Mt. Wilson, which captures an image of the sun per every minute of the day. He also received a provost’s grant for Professor Gene Bicker’s spark chamber project, which will detect particles from cosmic rays.

One might justifiably wonder if Orr is even able to set aside free time for himself, but he affirms, “I love what I do. I hang out with friends all the time. Everyone in rocket lab and in CHAFF lab constantly makes fun of me because...they say I do is eat. So, I come by and I temporarily cease work—you know, ‘Everyone should take a break. We’re going to Chik-Fil-A’ or something like that. I try to have a great time outside of class.”

Orr knows he’s a smart guy. He can go on for days talking about his lab work, but he carries with him a special brand of levity, humbleness and patience typically reserved for educators, and this is perhaps why he’s charting a path towards academia. When time permits, Orr tries to help out as much as he can with USC SCience Outreach (SCout). and regularly visits his old high school to lecture his old physic teacher’s class: “I’ve gone back and taught about primarily astronautics and basic theory on rockets and orbital mechanics. They love the ten minutes at the end of just videos, but some of them like the other stuff, too.”

Growing up in La Cañada-Flintridge (home to JPL scientists and backyard to JPL itself), Orr was regularly exposed to astronomy and thinks back fondly on this formative time. It’s only natural that he recognizes the value of connecting with that one student who’s really paying attention. “That’s what makes it worth it. And passing around bits of the rockets. I haven’t lost anything yet,” he laughs. As the scientific whizz kid of two lawyers, it looks like Orr has strayed from the family profession, but he’s actually following very closely in the footsteps of his grandfather: John B. Orr, USC university professor of religion and former dean of the School of Education.

For now, Orr’s undergraduate conundrum isn’t so much what to major in, but rather how to conflate all of his passions: “I absolutely love space. I’m just not sure if I want to build the things that get there or do the science that’s there. I’m torn between three things: astronautics engineering, physics and astronomy. Right now, demonstrative of that, I’m double majoring in astronautical engineering and astronomy. I think I’d like to go into academia. I’d like to get a Ph.D. in something because I love doing research.”

When asked how USC has informed his undergraduate experience, he doesn’t need to pause for thought: “I had the option to go to a number of very good schools, but I chose USC because I thought it would give me the best opportunities, and it certainly has. I don’t think that [at] a school like MIT or CalTech, I would have had the opportunity to work in so many labs and do some much hands-on work and do things that [are] usually in the prevue of graduate students.”

“[In] this school—if you’re out there searching for it—there’s a whole lot to do, and that’s something that I have absolutely loved about USC, that there [are] so many opportunities.” While he modestly remains convinced that he hasn’t eked out all opportunities yet, it’s safe to say he’s well on his way to making the most of it. For now, Orr has his sights set on the next annual rocket launching competition, dubbed BALLS 21 (the former for the tenacity required to launch amateur rockets, and the latter for its 21st event), slated for November 2012. Should Traveller make it to space, Orr, who is only twenty-years-old, will have two milestone 21’s to celebrate.