A New Solution for Solar

Stephen Cronin and his team of researchers are pioneering a new technology that will allow us to store solar energy for use when the sun is not shining. 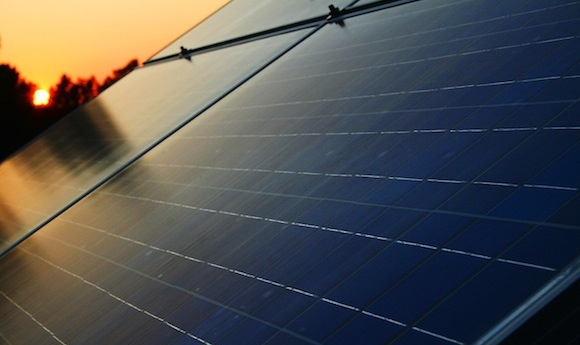 With winter quickly approaching, the days will be getting shorter and the nights longer, requiring us to use more electricity to light and heat our homes. While solar power has the potential to provide us with ample electricity during the day, we lack the basic technology to store solar energy to be used when we need it the most – when it is dark. Currently, solar panels can only produce electricity when sunlight hits them and that electricity must be used instantaneously. Since this energy cannot be stored, we frequently find ourselves in an energy shortage after sunset.

But what if we had a technology that allowed us to store solar energy that we could use when the sun is not shining? Stephen Cronin, associate professor of electrical engineering and electrophysics at USC Viterbi, is working on an emerging technology that will allow us to store solar energy in chemical bonds that we can use when it is dark and cold. His technology can help overcome the major shortcoming of solar power and ease the energy burden brought on by the winter months.

Since 2009, Cronin, the Gordon S. Marshall early career chair in engineering, and his team of 10 Ph.D. students have worked on solar-to-chemical energy conversion via a process called plasmonic catalysis. This process uses chemical compounds like carbon dioxide to transform solar energy into chemical energy, specifically methane and methanol, which can later be burned to produce electricity. Though carbon dioxide is known as an abundant greenhouse gas, Cronin has found a way to conduct this solar to chemical conversion process as a carbon neutral cycle, similar to how plants reduce carbon dioxide using chlorophyll.

Cronin envisions having his technology installed in gigawatt solar power plants, which is the standard size for a large power plant, where we could store solar energy for future use. The stored solar energy could later be converted into usable fuel, such as methane and methanol, which can then be burned to produce electricity and heat buildings. A gigawatt of energy could produce enough electricity to power 770,000 homes. This can help ease the energy burden we face at night and during the winter months when sunlight is scarcer.

“I wanted to do research that crossed some boundaries between applied science and technology,” Cronin said. “[Through this research], we are doing fundamental science that will eventually become a technology that is commercially viable.”

In addition to solar energy, Cronin’s plasmonic catalysis processes can be used in a wide variety of commercial applications, including water remediation and purification, and creating anti-fogging or self-cleaning coatings.

Plasmonic catalysis involves shining solar light onto titanium dioxide, TiO2, an inorganic compound that is used in products like sunscreen. When illuminated titanium dioxide converts water and carbon dioxide to create methanol or methane. These hydrocarbons can subsequently be burned to produce electricity in a carbon neutral process. That is, when the methanol is later burned, carbon dioxide is released back into the atmosphere, leaving us with the same amount we started with.

Cronin’s team, since receiving funding from the Office of Naval Research for this research in 2011, has found ways to improve plasmonic catalysis by replacing titanium dioxide with gallium phosphide, GaP, a crystalline material and semiconductor compound, and indium phosphide, InP, a similar chemical compound. Together, these compounds are more effective at converting solar energy into chemical bonds.

“TiO2 has a theoretical maximum solar efficiency of less than 4 percent. However, with gallium phosphide and indium phosphide, this efficiency could be more than 5 times higher.” Cronin said.

Plasmonic catalysis can also help lead to innovations and improvements in existing products produced by industrial chemistry. Alexander Benderskii, a Cronin research collaborator and an associate professor of chemistry at USC Viterbi, said that using compounds like gallium phosphide and indium phosphide can help the chemical industry innovate by allowing new chemical transformations of materials, and produce new types of plastics.

“These new types of catalysts are potentially very useful in the chemical industry,” Benderskii said. “This will allow industrial processes to use efficient, more selective [compounds], ones that can give you one product preferentially over another.”

The current efficiency of plasmonic catalysis processes are relatively low and a number of years away from becoming commercially viable. However, Jing Qiu, a Ph.D. student in material science and researcher in Cronin’s lab, said the profound effect these processes can have once these efficiencies are improved.

“If we can get the efficiency of these conversions to 10 percent, we can provide the total energy need for our human society,” Qiu said.

Cronin, who once played in a heavy metal band, No December, and had plans to become a rock star, fell into this field by accident. During his search for a Ph.D. advisor, he was picked up by Mille Dresselhaus, an MIT professor who pioneered Raman spectroscopy, which measures vibrational modes in materials using light. His work with her using light to interact with compounds in chemical reactions led him to the research he does today.

Plasmonic chemistry is a new, emerging field – one in which Cronin has made significant contributions. His most recent findings will be published in ACS Photonics in a paper entitled, “Plasmon-Enhanced Photocatalysis on TiO2-Passivated GaP and InP,” which will be released early next year.

“We have come a long way in a very short time,” Cronin said.