USC Viterbi alumnus Dr. Sultan Ahmed Al Jaber is helping to build one of the world’s most sustainable cities in a Middle Eastern desert 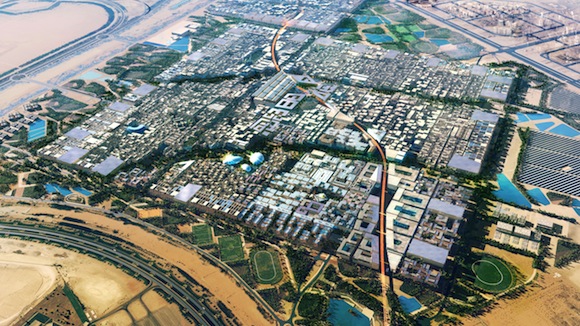 In a hot, arid patch of desert in the United Arab Emirates, the future unfolds.

Everything about Masdar City, from its widespread use of renewable energy sources, to recycled building materials, to grey water for irrigation, has been done with an eye toward sustainability, energy efficiency and carbon-footprint minimization. Taking advantage of the intense year-round sunlight, photovoltaic panels generate electricity, while solar power also provides energy for cooling.

But Masdar City is more than just an environmental oasis in an oil-rich land. Much more. Al Jaber envisions the city of tomorrow becoming a moneymaking incubator for green technology innovation and collaboration. The development’s success, he says, will hasten the country’s economic diversification and transformation into a knowledge-based society.

“The objective behind Masdar City is to create a global clean-technology cluster, a kind of Silicon Valley environment where tech developers, academics, entrepreneurs and companies come together for the development of renewable energy and green technology,” Al Jaber said.

Toward that end, the Masdar Institute of Science and Technology (MI), the Middle East’s first graduate research institute dedicated to renewable energy and sustainability technologies, opened its doors in 2010. MI, which will produce many of the city’s future entrepreneurs, researchers and thought leaders, was established in partnership with the Massachusetts Institute of Technology.

“It was at USC Viterbi that I learned how through innovation universities can lead the way in incubating tomorrow’s leaders,” Al Jaber said. “It is a pursuit that I have continued to build on at Masdar as well.”

As a reflection of Masdar’s attractiveness to outsiders, Siemens AG is building its new Middle East headquarters in the city, as is the International Renewable Energy Agency, or IRENA, an intergovernmental agency with more than 150 member states. Mitsubishi plans to have a future presence in Masdar.

Masdar City, though only in the early stages of construction, has already made a name for itself as an environmental leader. A 10MW solar photovoltaic (PV) plant, the largest such plant in the Middle East, powers the Masdar Institute and other buildings. A huge, hollow tower in the center of town acts as a cooling wind catcher that noticeably reduces temperatures in the city. Treated wastewater is 100 percent recycled for use in landscaping.

Not everything has gone according to script. A water desalinization plant had to be scrapped because of the projected energy needed to clean the exceptionally salty local water.

“We’re learning while doing,” Al Jaber said. “Look, nobody’s done this before, but we want to do it right.”