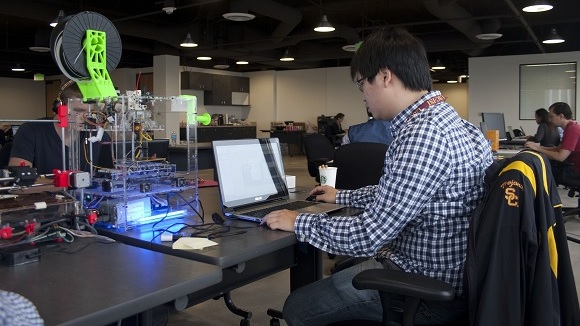 College students lounging in the living room of Kerckhoff Hall about a half mile off USC’s main campus hardly fit the image usually evoked by the term “hacker.” But they will embody the term—loosely, of course—as a part of the Viterbi Student Innovation Institute’s new venture, the Hacker House.

The idea behind the new USC Viterbi-supported collective is to give students immediate opportunities to experiment with technology. They will have space and resources to break, tinker and prototype new ideas with the hope of eventually starting a company.

“We’d love to expose our students to emerging digital technology, whether it be hardware or software—not just telling them, but giving them a chance to tinker and explore it,” said Ashish Soni, founding director of VSI2. “We want to drive innovation by bringing together like-minded students who are building innovative products and giving them their own space where they can meet with their teams.”

Soni designed the Hacker House to be a sort of precursor to VSI2’s successful USC Viterbi Startup Garage, the school’s two-year-old venture accelerator and the region’s only technology incubator focused on supporting companies that are led or co-led by engineers. The Garage, whose inaugural members have generated $6 million in follow-up seed money, has developed a strong reputation within the Southern California tech community.

Open Wednesday through Sunday and operated by a team of eight student leaders—five from USC Viterbi and three from other schools—the Hacker House will bring different groups of students together. It will give them access to new technology and let them run wild to see what may become the seeds of a startup. The budding entrepreneurs will have access to the building’s entire basement, which features secured lockers full of hardware ranging from Google Glass and smart watches to sensors and drones. The Hacker House's first-floor living room serves as a meeting place where participants can exchange ideas in a relaxed atmosphere or simply lounge and enjoy each other’s company.

The first-year goal for the Hacker House is to have dozens of innovation teams working there by May 2015. Sixty percent of the space will be reserved for teams committed to transforming their ideas into viable products and startups. The other 40 percent is open to all USC students and will also house occasional workshops, speakers and other miscellaneous social events. Open to all students, these events are expected to attract some of the most talented innovators over the course of the school year.

While the Hacker House's formal opening is not expected until mid-October, Soni hosted a soft launch September 10 that attracted nearly 100 students to introduce the concept and pick their brains for more ideas on what should go into the space.

“The soft launch was exactly what we’d hoped for as far as turnout and enabling us to isolate a short list of candidates for student leadership positions,” said Soni. “But we also had the opportunity to meet with many other younger students who were enthusiastic about the concept and shared a number of opinions on how they want the space to be utilized and what they want in it.”