Implantable Devices and the Medicine of Tomorrow 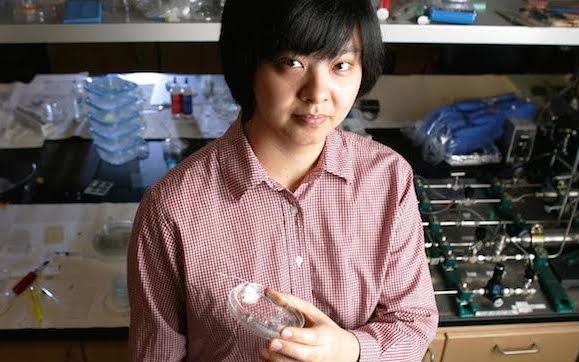 “What we’re trying to do here is build advanced infusion technology for a variety of applications.”

Ellis Meng, USC Viterbi professor of biomedical engineering, has known many titles. In 2009, she was named among the TR35 global innovators — MIT Technology Review’s “top 35 young innovators under 35;” and she is one of the 2012 Medical Device and Diagnostic Industry’s MedTech 40 under 40.

Meng is also the incoming department chair of the USC Viterbi Department of Biomedical Engineering, starting July 1, 2015. Professor Michael Khoo will be the interim chair from Jan. 1 to June 30, 2015.

Meng joined USC in 2004 after graduating from the California Institute of Technology with a Ph.D. in electrical engineering. Meng is working hard to apply microtechnology to implantable medical devices. Her work includes infusion pumps, wireless sensor systems and neural electrodes.

The implantable infusion pump is Meng’s longest running project. Currently, this device is being put to use by researchers to deliver drugs both in animals and humans. Since most lab animals do not swallow pills the same way humans do, injection is the most effective form of drug delivery. However, needles induce stress in animals and creates a confounding variable in the experimental data. Researchers are currently using the infusion pump to deliver drugs directly into the animals without creating unnecessary stress.

“The involvement of and close collaboration with clinicians is essential for the long term success of medical device projects,” said Meng. “So a key element in all of my work is to involve clinicians by getting their input early on and to have them inform the direction of our research.”

Generally, chemotherapy treatments involve introducing the drug into the bloodstream where it will travel along the circulatory system and eventually reach the cancerous tumor. However, the brain is protected by a blood brain barrier — a highly selective security barrier that only allows certain materials to cross into the brain, much like an exclusive bouncer for the brain. The pump will deliver the precise amount of drug at the right time only to the cerebrospinal fluid bathing the brain, rather than flooding the entire body and the healthy cells with toxic drugs meant to destroy cancerous cells.

The pump uses electric currents to induce electrolysis. As the current passes through water, it splits the water molecules into hydrogen and oxygen gas. The increased pressure from the gases acts on a flexible membrane and causes it to push out and inject the drug in a controllable manner. The rate at which the drug is being injected is proportional to the rate of gas generation and the strength of the current. Although the pump must be surgically implanted, it will only need to be refilled once every few weeks through a simple needle injection procedure. This device will help ease the pressure on pediatric cancer patients who will soon have the option to undergo chemotherapy treatment from the comfort of their own home.

In collaboration with local clinicians, Meng is also working on an implantable sensor system. The sensor targets a disease known as hydrocephalus, which causes the brain to accumulate cerebrospinal fluid and swell. The increased pressure on the brain causes brain damage, loss in mental and physical abilities, and even death. For the past several decades, the gold standard treatment is to implant tubes in patients to drain out the fluid. However, the tubes are prone to failure, and this failure is difficult to diagnose without surgery. Meng’s implantable sensor will help monitor the tubing and detect early signs of clogging and other problems. With the data it collects, the sensor will help pave the way for an improved design.

The brain itself is a very delicate organ, so replacing a neural electrode is an extremely dangerous and risky procedure. Since the brain is almost Jell-O-like, a stiff implant can cause serious injuries from the friction it creates between itself and the brain. Implants must also contend with the immune system: each time the human body is introduced to a foreign object, the immune system jumps into overdrive to destroy the invader before it can harm the body.

The same concept applies when a device like a neural electrode is introduced to the brain. The brain’s immediate response will be to protect itself, and since there is friction acting upon the brain because of the electrodes, the brain is susceptible to inflammation. To counteract this, soft polymer probes are armed with an even softer coating and chemicals to control the inflammation and promote brain growth. Thanks to a collaboration with Dr. Hossein Hashemi and James Weiland, these new electrodes will operate wirelessly. The neural electrodes will give researchers an inside look into neurodegenerative diseases and allow them to perform extensive behavioral studies on a variety of species since the subjects will no longer have to be sedated and unconscious as they are observed as they were in previous methods.