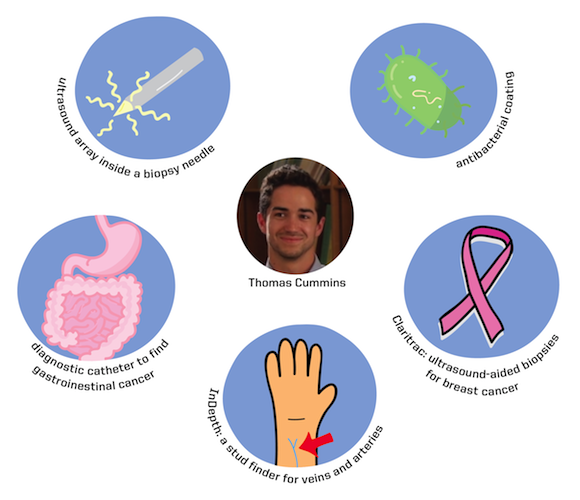 “When I was applying to Ph.D. programs, I knew I wanted to do something innovative and entrepreneurial, but at the time I didn’t know about programs that supported that. Then I found out about HTE@USC, so I met with George Tolomiczenko [the administrative director]. He told me how they’re going to match Ph.D. students with M.D. students, and that the goal of it is to have these groups start medical device companies, and I thought, ‘That is exactly what I want to do.’”

For a glimpse into the world of an innovative, entrepreneurial student that encapsulates the mission of HTE@USC and USC Viterbi, look no further than Thomas Cummins.

A collaboration between USC Viterbi and the Keck School of Medicine at USC, Health, Technology and Engineering (HTE@USC) is an interdisciplinary program that augments the training of select doctors and engineers through project-focused collaboration, resulting in the most effective and efficient solutions to real-world healthcare problems. 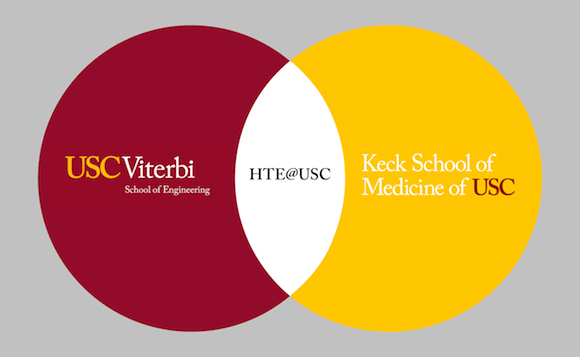 Cummins was accepted into the first cohort of HTE@USC in his second year as a Ph.D. student in the USC Viterbi School of Engineering’s biomedical engineering department, in the lab of Dr. Kirk Shung.

Cummins is a dynamic researcher and entrepreneur who has several projects in the works.

His Ph.D. thesis project revolves around the development of an ultrasound array that can fit inside a biopsy needle. It would give doctors a high resolution blown up image of the tissue they’re about to sample. “You can see what you’re sampling and get the best sample possible,” Cummins explains.

For HTE@USC, he is working with classmates to develop an anti-bacterial coating you can spray on surfaces. Differing from disinfectants in the marketplace today, it would be a coating that would perpetually kill any bacteria that came in contact with it.

“It will be a constant guard against bacterial growth that uses a mechanism that disrupts the cell wall of the bacteria. It punctures a hole in the bacteria's cell wall, and they lyse.”

A coating like this would have far-reaching applications: it could be applied to everyday harbors of bacteria like cell phones and doorknobs, but it could also be used on urinary catheters and other infection-prone hospital apparatus. Cummins is working with Jack Whalen, Boshuo Wang, Mike Kwon and Brian Quinn to develop this idea.

To quote many an infomercial: “And that’s not all!”

Cummins remains the CEO of Claritrac, a medical device company that won the Maseeh Entrepreneurship Prize Competition in spring 2012. According to the company website, their novel technology “will allow physicians to more efficiently and accurately locate suspicious lesions in the breast.” In fall 2013, Claritrac received an SBIR grant from the NIH worth $200,000 to continue commercialization efforts for their needle guidance technology.

He also is a founding member of InDepth, a startup that is currently developing a device that functions like a stud finder for veins to help medical personnel with the difficult task of placing arterial and venous lines in premature babies. Also on the InDepth team are Alexa Hudnut, Kevin Chin and David Mittelstein.

Lastly, Cummins is working with research professor Qifa Zhou as well as Dr. Jacques Van Dam, Director of Clinical Gastroenterology at the Keck School of Medicine, and Teng Ma to develop a diagnostic catheter that would go into the gastrointestinal tract to look for cancer.

The thread that winds through all his various projects is the desire to solve medical problems with the latest technology and bring those ideas to market so they can help people as soon as possible. Cummins truly has the entrepreneurial spirit, like so many other USC Viterbi students, and with the support of USC Viterbi and programs like HTE@USC and the Maseeh Entrepreneurship Prize Competition, he will solve tomorrow’s pressing medical problems.