Roberts' research focuses on the chemical biology of protein synthesis. His term as Chair will begin in July. 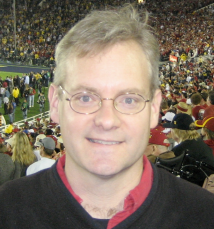 He succeeds Steven Nutt, who has served as the department chair since 2011.

"Professor Roberts' background is ideally suited for the multidisciplinary nature of the Mork Family Department of Chemical Engineering and Materials Science,” USC Viterbi Dean Yannis Yortsos said. “I expect that he will successfully advance its three main components in chemical engineering, materials science and petroleum engineering for the collective benefit of our students and faculty."

Roberts’ three-year term begins July 1, and while he looks forward to working toward the university’s three stated missions—research, teaching and service/outreach—he’s particularly excited about the latter.

“We have an important role in the community as people who are educators, inspirers and translators of science, and I try to instill that in undergrads who may be the only engineers in their families,” Roberts said. “They have a unique technical knowledge, and it’s important to help others understand the technologies and the implications of them as they develop them.”

Added Roberts: “It’s easy for scientists to live in their bubbles and not communicate to the world what they’re doing. It requires an effort outside of the lab to make those communications happen.”

Roberts graduated with honors and highest distinction from the University of Kansas in 1987, received his Ph.D. in biophysical chemistry from Yale and completed his postdoctoral work at the Massachusetts General Hospital and Harvard Medical School.

“Dean Yortsos was really a key driving force in bringing me to USC along with [President C.L.] Max Nikias, and I appreciate the trust that he’s placed in me,” Roberts said. “I’ve always enjoyed working with him and look forward to the opportunity to work more with him because he’s been very supportive.”