Two For One: Recycling Water While Recovering Energy

By: Natalia Velez
April 22, 2015 — We are running out of fresh water: every year, around two million people die from a lack of safe drinking water, and it is estimated that in 15 years half of the world's population could be living in areas running out of potable water, according to the United Nations Environment Program. In a world where natural resources are becoming scarcer by the day, treating wastewater has become a priority. 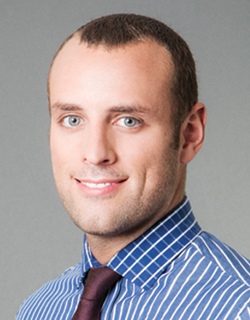 Against this backdrop, Adam Smith, assistant professor in the Sonny Astani Department of Civil and Environmental Engineering, wants to develop efficient and sustainable ways of cleaning water. He explores the use of microbes for water treatment, focusing on resource recovery from waste streams.

“My research aims to develop environmental biotechnologies for treating wastewater, so that we can generate water for reuse while recovering resources such as energy and nutrients,” said Smith, who joined USC Viterbi last fall.

From the Beginning
Scientists have long known that microbes can be used for purifying water. However, current wastewater treatment processes are aerobic, which means that microbes use oxygen to degrade organic matter.

“Aerobic processes require us to constantly pump oxygen into the system,” Smith said. “This consumes a lot of energy that we don’t ever recover.”

“Some microbes can convert organic material into methane, or natural gas.” Smith said.“We are designing systems in which we can harness those microbes to consume waste in water and produce methane gas, which we can then collect and convert into energy.”

This approach would allow us to put some energy back on the electrical grid, while reducing water treatment costs.

Branching out
Smith’s research on converting water waste into energy is an extension of the work he began at the University of Michigan, where he earned his Ph.D. in 2014.

However, the engineer plans to move that work forward at USC. In addition to anaerobic biotechnologies, he currently studies microbial fuel cells; systems in which specialized microbes can consume waste material and directly produce electricity rather than methane gas. This electricity can then be used to power the system.

“Releasing this methane to the environment could contribute to greenhouse gas emissions,” Smith said. “To avoid this risk and recover additional energy, microbial fuel cells, which have long been viewed as competitors to anaerobic processes, could actually be used as a compatible technology downstream of an anaerobic process.”

His work was among the first to demonstrate the possibility of treating domestic wastewater to strict environmental standards while simultaneously producing energy in low temperatures.

“Dr. Smith’s research on the treatment of domestic wastewater at low temperatures evolved from being a marginal idea to one that is embraced by industry leaders, and is moving to the mainstream in the environmental engineering community,” said Lutgarde Raskin, Smith’s doctoral thesis advisor and chair of the Department of Civil and Environmental Engineering at the University of Michigan.

A World of Possibilities
Even if Smith’s research is still very experimental, it could represent a drastic change in millions of people’s lives. Developing a water treatment system that is self-sufficient, he said, could make clean water available in areas that currently lack water infrastructure.

“Access to clean water is something that we take for granted,” said Astani Department Chair Lucio Soibelman, “but there are many countries in the world where cleaning wastewater isn’t even an option, and Adam is working to find ways of making it possible.”